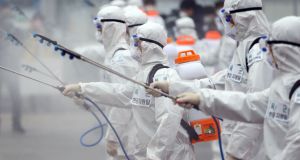 The World Health Organisation (WHO) has raised its global risk assessment for coronavirus to “very high” from “high” as countries struggle to contain the virus.

The illness could reach most “if not all countries”, the organisation warned after more confirmed cases emerged with the largest country in Africa, Nigeria, recording the first case in sub-Saharan Africa.

Elevating the risk level to very high is intended to spur countries to step up their responses to the spread of the virus, said Dr Mike Ryan, the Irish man who runs the WHO’s emergencies programme.

He said health officials globally needed to be ready to isolate patients and carefully trace their contacts to keep the disease from spiralling out of control. “This is a reality check for every government. The window of opportunity is closing. Wake up,” he said in Geneva yesterday. The list of affected countries is edging towards 60 with Mexico, Belarus, Lithuania, New Zealand, Azerbaijan and the Netherlands all reporting cases yesterday, all with a travel history connected to epicentres in Italy and Iran. Mexico is the second Latin American country to register the virus, after Brazil.

Britain saw its first death from the disease yesterday, of a man who contracted it on a cruise ship moored in Japan. On Saturday, three more patients from England tested positive for coronavirus, bringing the total number of UK cases to 23, chief medical officer Prof Chris Whitty has said. Health officials are tracing anyone who has been in contact with a coronavirus patient who became the first to catch the illness within the UK. Prof Whitty said it was not clear if the patient had contracted the virus “directly or indirectly” from somebody who had recently travelled abroad.

In Northern Ireland, a woman who had travelled from northern Italy through Dublin Airport, was diagnosed with Covid-19 on Thursday. Health authorities north and south of the Border moved to reassure the public on Friday that everyone who was in close contact with the woman had now been identified. The cabin crew on the Aer Lingus flight to Dublin on which the woman had travelled have been placed in self-isolation for 14 days as a “precautionary measure”, the airline said yesterday.

The director of the State’s Health Protection Surveillance Centre, John Cuddihy, said if people had not been contacted they had no need to be concerned. Dr Jillian Johnston, consultant in health protection at the North’s Public Health Agency, said “members of the public who have travelled between Dublin and Belfast using public transport need not be concerned”.

Minister for Health Simon Harris said everything that could be done from a public health point of view in Ireland to deal with the coronavirus was being done. He said protocols in place for handling a positive case, including contact tracing and links between health authorities on both sides of the Border, had worked very well.

Head of the HSE Paul Reid said the health service was making significant preparations to deal with the virus including looking at ways of increasing intensive care facilities across the health system. It was also looking at arrangements to test people at home for the coronavirus.

The Catholic Diocese of Down and Connor and the Dublin archdiocese are suspending the shaking of hands for the sign of peace at Masses and administering Communion into the hands only.

Meanwhile, world shares were on course for their largest weekly fall since the 2008 financial crisis. Shares listed on the Iseq index in Dublin have shed more than a tenth of their value this week.

The latest WHO figures indicate about 2,700 deaths in China and 57 deaths in 46 other countries.

Deaths and bans of public gatherings

Deaths in Iran from coronavirus have hit 43, the highest number outside China, and the total number of infected people has risen to 593, an Iranian health official said on Saturday.

The country is at the epicentre of the outbreak in the region, with several countries in the Middle East reporting cases of the coronavirus stemming from Iran.

South Korea urged citizens on Saturday to stay indoors as it warned of a “critical moment” in its battle on the coronavirus after recording the biggest daily jump in infections, as 813 new cases took the tally to 3,150.

The French government banned public gatherings with more than 5,000 people on Saturday as France reported 16 new cases. Health minister Olivier Veran said the number of confirmed cases had risen to 73 and that there had been no new deaths.

California health officials confirmed a second personin the US who did not travel internationally has tested positive for the strain of coronavirus known as Covid-19.

Health officials in San Jose said the patient was an older adult woman with chronic health conditions who does not have a travel history or any known contact with a traveller or infected person.

It comes a day after state officials said a woman hospitalised in Sacramento had contracted the illness after no known contact.