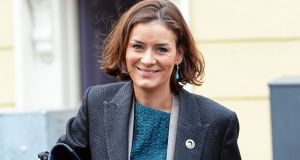 Against expectations, former Dublin Bay South TD Kate O’Connell has been excluded from the nominations to run for Fine Gael in the Seanad election which takes place next month. File photograph: Eric Luke

An internal Green Party row over the selection process for Seanad election nominees has delayed the announcement of its candidates for the vocational panels.

Ms Mulherin said on Friday night that she had been a public representative for 21 years and “I’ve given it my all”.

She said it had been a tough general election, there was a short run-in to the Seanad election and it was time for her to consider an alternative career, although she did not rule out a return to politics.

She had been a taoiseach’s nominee in 2016 – such appointments are made without election. Ms O’Connell could not be reached for comment.

Party sources said they had great difficulty in making choices and it focused on constituencies where Fine Gael was not represented.

Minister of State at the Department of Finance Michael D’Arcy and former TDs Noel Rock in Dublin North-West and Tom Neville in Limerick County have been confirmed as candidates.

They are among 13 candidates who have secured nominations from the party’s TDs and Senators. In total there are 35 Fine Gael candidates running for the Seanad, 22 on “outside” nominations.

While Monday March 2nd is the deadline for party nominations a Green Party announcement of its candidates had been expected following the interviews.

But it has been delayed after what is believed to be disagreement over the process involved including on how candidates were marked and apparent changes to the voting system.

The party declined to comment but it is understood the final nominations will be announced on Monday before the noon deadline.

Minister of State Catherine Byrne, former Fine Gael TD for Dublin South-Central, whose name had also been mentioned as a potential Seanad candidate, decided not to seek a nomination.

However, four Fine Gael candidates from Ms O’Connell’s Dublin Bay South constituency are all running for the party with “outside” nominations.

Under the complex Seanad election system for the vocational panels, any candidate from any party or none can seek a nomination from 110 outside nominating bodies – civic society organisations representing sectoral interests – for the five vocational panels.

Those seeking outside nominations do not need party approval for the nomination but for “inside” nominations a candidate must have the backing of four TDs and/or Senators.

Three of the party’s inside nominees are women including Cllr Aisling Dolan in Roscommon-Galway where the party has no representation along with Meath East-based councillor Sharon Tolan and Cllr Emer Currie in Dublin West.