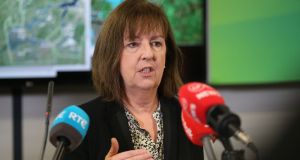 Evelyn Cusack, head of forecasting at Met Éireann, at a meeting of the National Emergency Co-ordination Group. Photograph: Nick Bradshaw for The Irish Times

Thousands of homes are expected to be left without electricity on Saturday afternoon when Storm Jorge batters the country, bringing with it extremely strong winds and flooding and felling trees around the country.

Met Éireann has issued a status red wind warning, the highest level of weather warning, for counties Galway and Clare from 1pm to 4pm on Saturday with “very severe winds” expected to reach mean speeds of 85 to 100km/h in places on Saturday afternoon, and gusts of 130 to 145km/h.

A status red severe weather warning is rarely declared and calls on people in affected areas to “take action to protect themselves and/or their properties”.

Families already affected by flooding in Co Clare remain on high alert as they face into the worst of Saturday’s storm. A Clare County Council source warned that strong winds could blow floodwater into people’s homes.

A status orange wind warning is in place for Leinster, Cavan, Monaghan, Roscommon, Cork, Limerick, Tipperary and Waterford which is valid between 1pm and 7pm on Saturday.

Status yellow rainfall warnings have also been declared across Munster, Connacht and Donegal, with accumulations of between 20 to 30mm expected between Friday and Saturday, and 40 to 50mm possible in mountainous areas.

Met Éireann has warned of a high risk of flooding due to already-saturated ground conditions and elevated river levels. Evelyn Cusack, head of forecasting at Met Éireann, said there had been twice the average amount of rainfall for February, and in some places up to three times the average.

“It’s the wettest February on record so far at several of our stations, including the Phoenix Park, which goes back to the 1800s, and several stations in Mayo and Limerick as well,” she said.

Derek Hynes from ESB Networks said additional crews would be deployed to Galway, Clare, Limerick and Athlone this weekend. Mr Hynes said the last three storms resulted in between 10,000 and 40,000 power outages and they are “expecting something similar”.

An inflatable water dam will be reactivated at Spanish Parade in Galway city while car parks at Toft Park and the promenade in Salthill will remain closed throughout Saturday, said the council. The promenade will remain open “only as long as it is safe” and will be closed to traffic during the status red period, it added.

The National Parks and Wildlife Service has requested the public do not visit national parks, national monuments or nature reserves while the weather warnings are in place.

Westmeath County Council said on Friday evening that water levels in the River Shannon were continuing to rise in the Athlone area, albeit at a slower rate than in previous days.

“The council is in receipt of an ESB forecast of river levels for the next four days and this is indicating that the River Shannon in Athlone will continue to rise up to Sunday... the highest predicted level is... approximately 4cm above current levels,” it said.

1 Coronavirus: Cabinet to assess ‘stay at home’ measures as 50,000 deaths expected worldwide
2 Coronavirus: Should everybody be wearing masks to combat Covid-19?
3 FF-FG government would look to avoid return to austerity
4 ‘Everyone still thinks it’s a joke’ - parents of toddler with coronavirus speak out
5 Coronavirus: Trump’s tone changes as US faces brutal loss of life
Real news has value SUBSCRIBE