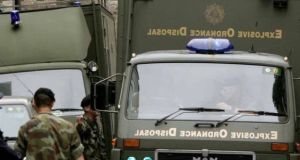 The Army bomb disposal unit was deployed to Wexford on Monday to deal with two second World War shells which were being unwittingly used as garden ornaments.

It is understood the objects were found by a fisherman and gifted to the owners of a house in the village of Oulart to decorate their garden.

The owners did not know the objects contained potentially live explosives until they put images of them on social media, leading to the Army Explosive Ordnance Disposal Unit (EOD) being alerted.

The objects have now been assessed and made safe. No explosives were found inside and they have since been taken away by the EOD team. It is not known if they will be returned to the owners.

The shells are believed to have been fired from a costal artillery gun, and may have been inert training rounds. Ireland operated several costal artillery batteries around its coastline before and during the war, which was known here as the Emergency.

The shells may also have originated from a British battery. A Defence Forces spokesman said it was not possible to put an exact date on them.

Retired Lieut Col Ray Lane, a veteran of the EOD squad and a former commander of the Army Ordnance School, said in the past it was not unusual to find historical pieces of military ordnance in use as household objects by unwitting owners. These object tend to date to the War of Independence or the Civil War.

Lieut Col Lane said he was once called out to deal with “a live artillery fuse being used to hold open a door”.

“You often get grenades dug up, most also manufactured in Ireland,” he told The Irish Times. “I was tasked to Wexford years ago, a farmer had dug projectile up. I kept digging and found at least 40 more.” He let the farmer keep the grenades for use as scrap metal as they did not contain any explosives.

Wexford was one of several counties bombed by the Germans during the second World War. In 1940, the Luftwaffe dropped bombs on the village of Campile, about 60km from Oulart. The IRA also operated a makeshift explosives factory in the county during the Emergency.