After the programme for government is agreed, what’s next?

Taoiseach Leo Varadkar holds his first press conference following the announcement that Fianna Fáil, Fine Gael and the Greens have agreed a draft for government with Martin set to become the next taoiseach. Video: RTÉ News Now 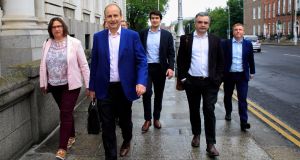 Once the document is finalised and endorsed by the three party leaders, Micheál Martin, Fianna Fáil, Leo Varadkar, Fine Gael and Eamon Ryan, Green Party – expected to take place this evening – it will be completed and circulated to each party for checking. After that, it will be sent to each of the parliamentary parties who will meet on Monday to debate its contents.

They will vote on sending the deal to the party memberships, though it would be a major shock if any of the parties were to refuse to take that step. However, the stance taken by Catherine Martin, the Green Party deputy leader, will be closely watched. Her support could be crucial to the chances of the deal passing with the Greens.

How do the party memberships vote?

Each party has its own system to decide on the deal. Fianna Fáil has a one-member, one-vote straight ballot among party members, with postal ballots likely to be sent out on Monday.

Fine Gael has a more complicated electoral system, involving delegates from each constituency, the executive council and the party’s elected representatives. However, the parliamentary party makes up 50 per cent of the electoral college, so this is by far the most important forum.

But it is the Green Party which is likely to face the toughest struggle to ratify the deal. The party constitution requires a two-thirds majority among members to approve any coalition agreement, so it is entirely possible that a majority could support the deal – just not a big enough majority. If that happens, the deal is dead in the water.

When will the voting take place?

Ballots will be issued to those entitled to vote in the coming days, and once returned, will be counted next week by party headquarters. But the timelines are tight, and there are concerns among some party officials that longer postal delivery times because of the Covid-19 pandemic may result in ballots arriving after a deadline. Anyway, a deadline can’t be extended beyond the end of next week. There was a suggestion that all three parties would announce the results simultaneously, but nothing has been agreed at this point.

So what are the deadlines?

Votes in both Houses of the Oireachtas on renewing the Offences Against the State Act must be taken before June 30th, or key sections, including those underpinning the Special Criminal Court, will lapse. This vote is held every year and is normally a formality. But unless a new taoiseach is in place to make his 11 nominations to the Seanad, the vote can’t be held in the upper house as it will be legally incomplete, the Government has been advised.

So the Dáil needs to elect a new taoiseach, he needs to form a new government and make his nominations to the Seanad before June 30th to allow a vote to take place in that house on that day, a fortnight from next Tuesday.

A group of Senators says it will seek a declaration from the High Court this week that the Seanad can legislate without the taoiseach’s 11. If that is successful, it would take the concern about the Offences Against the State Act out of the picture and relax the deadlines, though it would also mean that the Government’s legal advice on the issue was wrong.

Assuming the Attorney General’s advice is correct and the end of June deadline holds, the new taoiseach will have to be elected, at the latest on Monday, June 29th, though there are suggestions that it should take place on Friday 26th. There has been no agreement yet among the parties on the precise choreography.

Who will be taoiseach?

Micheál Martin will be the agreed nominee of the new coalition for the role of taoiseach, with Leo Varadkar taking a Cabinet job – a new Department of the Economy has been mooted for him – and the role of tánaiste. Varadkar – or rather, whoever is the leader of Fine Gael – will become taoiseach halfway through the new government’s five-year term.

If Martin is elected by the Dáil, he will then nominate his Cabinet later that day, which would require another Dáil vote. He would also nominate his 11 senators, as previously agreed with the other two party leaders.

How are the Cabinet jobs going to be shared out?

It is expected that the 15 Cabinet jobs will be allocated on a 6:6:3 ratio, with Fine Gael and Fianna Fáil having six members each, and the Greens three. A small number of super junior ministers – probably two, one each for Fianna Fáil and Fine Gael – may also be permitted to attend Cabinet, as they do at present. The chief whip also attends.

There will be intense speculation over the coming weeks about who gets the jobs. It is a particularly tricky situation for Varadkar, who will have to demote several Fine Gael Ministers and junior Ministers, but Varadkar himself, Paschal Donohoe, Simon Coveney, Simon Harris and Heather Humphries are likely to return.

And what happens if one of the parties reject the deal?

Sources in all parties agree that while Fine Gael and Fianna Fáil are odds-on to accept the deal, it’s impossible to predict the outcome among the Green Party at this stage.

If that party rejects the agreement, sources say Fine Gael and Fianna Fáil will seek to go ahead and form a government with the support of a number of independent TDs, though the climate action aspects of the programme for government are likely to be watered down.

But there is no certainty that such an agreement could be put together quickly, or at all. The country would be plunged into a political crisis, and there would be a fierce clamour for a general election.