Liam Campbell, found liable for bombing in civil court, to be extradited to Lithuania 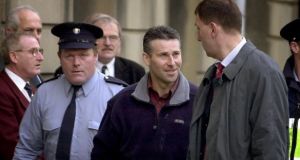 The SDLP leader has said it was wrong for his party to support a proposal passed by councillors in Fermanagh and Omagh District Council opposing the extradition of a man found liable in a civil court for the 1998 Omagh bombing.

The wording of the item, which was brought during Any Other Business at the end of the meeting, proposed that the council “writes to the offices of An Taoiseach and the Department of Justice and Equality in support of Irish citizen, Liam Campbell, against his extradition to Lithuania, to protect the fundamental human and civil rights of an Irish citizen against human rights abuse”.

Thirty-one people, including unborn twins, were killed in the Real IRA bombing of the Co Tyrone town in August 1998.

Nobody has ever been convicted of the attack in a criminal court. Campbell is one of four men who have been found liable of the bombing in a civil court.

He is wanted in Lithuania on international arms trafficking charges. Following a judgement in the High Court in Dublin last month, an extradition order is to be made on July 13th.

SDLP leader Colum Eastwood, said on Thursday that the party’s councillors would reverse their position when it comes before a full council meeting for ratification.

He said their decision to support the proposal had caused “immense hurt”, adding that the party would offer to meet with the relatives of those killed and the injured in order to express their “profound regret”.

The SDLP’s group leader on Fermanagh and Omagh council, Mary Garrity, apologised “unreservedly” for their decision to support the motion, and confirmed they would oppose it at the full council meeting.

“The SDLP has opposed violence and the perpetrators of violence for fifty years, it was never our intention to cause additional hurt to victims and as a council group, we regret that,” she said.

The director of services with the South East Fermanagh Foundation (SEFF), which represents a number of the families bereaved by the Omagh bombing, said “anger, shock, and feelings of bewilderment and betrayal have been expressed to us by victims and survivors of the bomb from across the community”.

He said it was “absolutely scandalous” that the council in Omagh would support such a motion, and said there were “questions that need answering.

“The SDLP in particular but not exclusively need to explain their support for the motion and why they felt it appropriate or necessary to support the interests of a commander of death of the very citizens and community to which they owe their positions as councillors.

“SEFF represents a number of the bereaved and injured and their message as relayed through us is simple; you who promoted and also endorsed last night’s motion have betrayed us and you are walking on the graves of our loved ones,” he said.

Ulster Unionist Party (UUP) councillor Chris Smyth, who is the chair of Fermanagh and Omagh District Council, voted against.

“This nauseating proposal referred to the human rights of Liam Campbell but paid no regard to the rights of the 29 people and two unborn children who were murdered on the streets of Omagh in 1998,” Mr Smyth said.

“I thought the rights of our citizens would have been the primary concern of the Council which covers the Omagh area.

“In the middle of a pandemic, I simply cannot understand what has possessed the members of the council who thought it appropriate to lobby on behalf of Mr Campbell when the victims of the bomb still go without proper justice,” he said.

It was also opposed by DUP councillors, who said they were “truly sickened, angry and upset” that the “deplorable” motion had been passed.

The decision, they said, “adds insult to injury to the innocent victims of terrorism”, and called on those who backed the proposal to “realise the hurt they have caused and withdraw their support”.