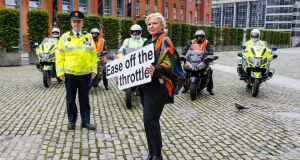 Anyone who has renewed a learner driving permit more than four times should be compelled to take driving lessons, the Road Safety Authority (RSA) has said.

The recommendation is one of a number of measures called for by the authority in a submission to the Department of Transport aimed at addressing anomalies in the provisional licence system.

Speaking at a road safety event on Thursday, RSA chairperson Liz O’Donnell said there was a cultural problem in Ireland with people driving on learner permits for a long period, and also a cultural problem of drink-driving, though that had decreased in recent years.

The authority recommends that drivers who have had five learner permits should not be allowed to renew their permits unless they sit a driving test first, and they should also have to take mandatory driving lessons.

The authority has recommended that the cost of renewing a learner permit, which is currently €35, be increased considerably, though it did not suggest a figure. At present a learner permit lasts two years if you have failed a test, and a year if you have not sat it.

The RSA is recommending that the length of the learner permit be reduced to six months for those applying for a fifth permit or more.

The submission was made before it was revealed that Minister for Agriculture Barry Cowen had been driving for years on a learner permit, and only received a full licence some time after failing a drink-driving test.

Ms O’Donnell said there were long-standing concerns about the “the over-reliance for too long on the learner permit”.

She said the so-called Clancy amendment, under which gardaí were allowed to impound cars if they were being driven by unaccompanied learner drivers, had seen a 25 per cent increase in those applying for the driving test.

An Garda Síochána said it had impounded 3,000 vehicles in the first five months of the year despite the country being in lockdown for much of that period.

“I hope the new Minister for Transport will look at these proposals which are significant,” said Ms O’Donnell. “They are broadly speaking to decrease the time of the renewal permit and to increase the cost of endlessly renewing your permit. I would urge everybody out there to apply for their test. A learner permit is meant to be short term.”

She was speaking at the launch of a campaign to improve road safety for motorcyclists, at which both the RSA and the Garda called on such road-users to “ease off the throttle” and to slow down.

An analysis of available coroners’ files for 2013 to 2017 found that a third of motorcyclists were exceeding the speed limit when they died.

As of July 9th, eight motorcyclists had died on Irish roads, up from three in the same period last year.