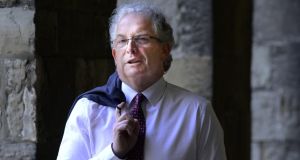 Outgoing director-general of the HSE Tony O’Brien. Supporters maintain he brought stability to the HSE in a period of institutional uncertainty, budget cuts and patient service crises. Photograph: Cyril Byrne

On a wall in his office in the Health Service Executive’s headquarters at the old Dr Steevens Hospital in Dublin, the agency’s director-general, Tony O’Brien, placed a sign saying: “Speak truth to power.”

Staff, he believed, should feel free to say things that he might not want to hear.

It was an adage O’Brien himself followed on occasion during his five-year tenure in charge of the health service, when he took a number of public stances on issues that were not politically popular.

For example, he argued that some of the problems facing the health service stemmed from ministers from different backgrounds chopping and changing their minds about fundamental reforms that should be put in place.

On Thursday night, power spoke back.

In the two weeks since the cervical screening controversy broke, O’Brien had insisted he would not resign. However, he had now run out of road.

The Dáil arithmetic meant a motion of no confidence in O’Brien would be passed next week.

The Government was never going to allow itself to be defeated in the Dáil defending a HSE chief in whom many Ministers had little remaining confidence.

It is perhaps ironic that it was a scandal in cervical screening that ultimately led to O’Brien’s departure.

He strongly argues that while population-based screening programmes are not infallible, they save lives.

He told the Public Accounts Committee on Thursday that the cervical screening programme had detected 50,000 high-grade abnormalities and had led to the avoidance of hundreds of incidents of cervical cancer among women.

He also stoutly defends the decision a decade or so ago to outsource the analysis of cervical smear tests to laboratories abroad – a move which has become very controversial in the light of the current climate.

Ultimately the wisdom of the outsourcing decision will be determined by the new Government review into the current overall controversy.

However, O’Brien has argued that the capacity simply was not available in Ireland in 2008 to facilitate a national screening programme, that women were left waiting for up a year for results and that in some instances smears were being analysed on kitchen tables at home by lab staff working on overtime.

O’Brien’s trajectory to the top of the health service was linked strongly to former minister for health James Reilly, who brought him into the Department of Health to run his pet project, a facility called the special delivery unit which was to reduce waiting lists and waiting times for patients in hospitals.

Critics of the special delivery unit concept from the start argued – correctly, as it turned out – that it would deliver only short-term results. They said that as soon as the focus – and the budgets – moved elsewhere, any progress made would quickly run into the sand.

But Reilly had bigger things in mind for O’Brien. Having got rid of the board of the HSE, he now changed the structure and established a directorate to run things. Revised legislation allowed Reilly appoint directly, without any competition, the agency’s first director-general and he opted for O’Brien.

The appointment was something of a poisoned chalice for the chosen man. Firefighting was the order of the day. Hundreds of millions of euro were cut from the health budget as austerity hit hard. The removal of discretionary medical cards led to ructions on the airwaves and in Leinster House.

Perhaps the biggest overall challenge was that the job he ended up doing was in reality not the job he was given in the first place.

Under Reilly’s vision, the HSE was to fade away as the country moved to a system of universal health insurance. O’Brien was effectively overseeing an organisation that was supposed to be dismantled.

After Reilly’s departure, his successor as minister for health, Leo Varadkar, was less enthusiastic about universal health insurance and the HSE was earmarked to remain in place .

Supporters of O’Brien maintain that he brought stability to the HSE during the years of institutional uncertainty, budget cuts and the various patient service crises, including the fallout from the death of Savita Halappanavar at University Hospital Galway and the maternity care controversy at Midland Regional Hospital in Portlaoise.

One of main successes of his term was uprooting the top-up pay culture that had become prevalent at some voluntary hospitals and health agencies. He appointed a special team to run the Central Remedial Clinic to keep the service going after its board resigned in the wake of the scandal over public donations being used to supplement executive pay.

Relations, however, between O’Brien and Varadkar were never as warm as the association had been with Reilly.

A number of sources maintained there was frustration at political level on occasions about firm commitments which had been made by the HSE to the department or the government and were not delivered. Some in government also viewed the regular correspondence surrounding the HSE’s annual service plan as representing an obvious pitch for more money.

A headline in a major newspaper interview in late 2015 which said “HSE chief: no plan, no money and no vision for health” also raised eyebrows among politicians.

After Varadkar became Taoiseach, it was generally assumed that O’Brien would not be offered another term as HSE chief once his contract ended in July 2018.

A regular concern of the Taoiseach has been that the State has not been seeing the appropriate return on the level of investment it was making in the health service.

During a row in the Dáil over the HSE budget in February, Varadkar laid out his stance: “It seems to me that the difficulty we have had for many years with the running of our health service is that rather than trying to manage health services within an ever-expanding budget, as other agencies do, the HSE does something very different – it monetises every problem and passes it on to the Department of Health in the full knowledge that those documents will either be released under freedom of information or will be leaked .”

In other words, he suggested the HSE was using freedom-of-information laws and leaks to press its case for larger budgets.

As he departs this weekend, associates remark wistfully that in hindsight, from a personal perspective, it would have been preferable if O’Brien had left last Christmas.

He had already told Minister for Health Simon Harris he would be leaving in the summer. However, his long goodbye was beset by one crisis after another.

The hospital trolley crisis intensified during the winter, with more than 700 patients waiting for a bed some days, while waiting lists also hit record levels.

The perennial budgetary problem also remained – despite hundreds of millions of euro more being allocated by the Government. It is expected the HSE will record a deficit of close to €100 million for the first quarter of this year.

And in the midst of the controversy over cervical screening, there was also the revelation in The Irish Times that Harris had permitted O’Brien to take a paid directorship with a US biotech company while still running the HSE.