Irish holidaymakers caught up in customs chaos at Faro Airport 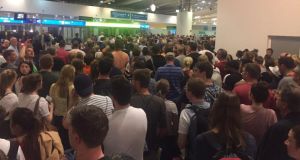 Faro Airport: “It looks like passport control operators have gone on a lightning strike,” Brenda Donohue of RTÉ tweeted

Passengers at Faro Airport, in the Algarve, were left standing for hours in a hot, cramped and overcrowded concourse just ahead of passport control on Sunday night with no explanation from airport staff about the reason for the delays.

Angry travellers took to social media to express their anger at how they had been treated at the Portuguese airport.

The RTÉ presenter Brenda Donohue, who was stuck in the middle of the crowd, told The Irish Times she had never experienced anything like it. “We arrived in the airport with plenty of time to spare and made it through check-in and the security checks without any difficulties. But when we went down into the passport concourse the problems started,” she said.

“There were around 20 passport gates as well as the electronic gates, but when we approached there were hundreds and hundreds of people ahead of us. Only one guy seemed to be on passport duty, and he appeared to be going as slowly as it is possible to go.”

Although a handful of other security staff were also on the concourse they were not checking passports or monitoring the electronic gates. “They were just standing around, and they refused to engage with anyone,” Ms Donohue said. “No one could hear any of the announcements being made about flights, the heat was stifling and there was absolutely no crowd control.”

Unbelievable scenes at@faroairport as it looks like passport control operators have gone on a lightening strike. Safety issues here as hundreds are in a cramped queue for one guy to check all the passport! No security, no air conditioning and no explanation. @RTERadio1 @rte pic.twitter.com/yAznH2jB11

When a man ahead of her asked if his wife, who was seven months pregnant, could be let through, staff just shrugged and his request was refused, Ms Donohue said.

After she had been waiting in the crowd for almost two hours, her flight to Dublin was called. “Loads of people just milled towards that one guy on passport control, and he immediately stopped what he was doing. He just walked away. We were all left waiting for another 15 or 20 minutes without anything happening before the single passport-check gate reopened.”

She said it was a terrible experience for older people and people with young children. “There were some people who were seriously panicking because it was so claustrophobic and because they were afraid they would miss their flights.”

The Aer Lingus crew delayed their flight’s departure for about 30 minutes, until all the passengers could board the plane.

“I tried to find out what was going on from airport staff, but no one seemed to have a clue. I asked one staff member if it had happened before and he said it had, at weekends, but never as bad as last night.”

Faro Airport is the hub for holidaymakers heading to the Algarve, which is hugely popular with Irish tourists. The airport can accommodate more than six million passengers a year, and it boasts that it has the ability to handle 3,000 people an hour after a €33 million expansion last year.

The Irish Times has contacted the airport to find out what caused the delays and whether passengers can expect further delays over the summer. At the time of writing the airport had yet to respond.