Anti-abortion lawyers say Constitution could be amended for ‘hard cases’

Laws could be altered to deal with rape, incest or fatal foetal abnormalities, group says 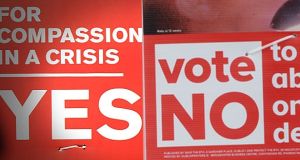 A group of lawyers say the Eighth Amendment, which gives an equal right to life to the mother and her unborn child, could be altered, rather than a question being posed over whether it should be removed.

Access to abortion in the “hard cases” of rape, incest or fatal foetal abnormalities could be dealt with by amending the Constitution, a group of lawyers advocating a No vote have said.

The Eighth Amendment, which gives an equal right to life to the mother and her unborn child, could be altered, instead of the current proposal to be voted on – on whether to remove it from the Constitution.

Barrister Benedict Ó Floinn said proposed legislation was for “a wide-ranging right to abortion” and not “what’s being sought to be conveyed – that somehow this is all about hard cases”.

Venetia Taylor, another barrister in the group, said she would have voted Yes if the proposed Government legislation for abortion had only “dealt with the hard cases like rape, incest and fatal foetal abnormalities”. Ms Taylor said she was supporting a No vote as the legislation on the table “just goes way too far”.

Planned legislation – if the Eighth Amendment is removed from the Constitution following a Yes vote on May 25th – would provide for abortion on request up to 12 weeks of pregnancy.

Access to abortion could be provided after this period if there is a threat to the mother’s mental or physical health, or in the case of a foetal condition that would result in the child’s death before or shortly after birth.

Currently abortion is only permitted in Ireland where there is a risk to the life of the mother, which includes the risk of suicide.

A repeal of the Eighth Amendment “sweeps away all of the rights of the unborn child”, Mr Ó Floinn said on Friday. “One side might call it constitutional space, one side might use words like ‘sweep away’, but both are agreed all of those rights are gone”, he told media at a press briefing.

The group said more than 175 colleagues in the legal profession had signed a statement outlining that the Government’s proposals “will open the door to abortion in wide-ranging circumstances”.

If the referendum to repeal the Eighth Amendment passed, there would be a knock-on effect for lawyers in the courts, Mr Ó Floinn said.

He referenced a High Court case taken by Lavinia Doyle against the Health Service Executive, for damages after her unborn child was stillborn in 2003.

Lawyers for the family had relied on the constitutional right to life of the unborn in the case, which was settled in 2007 for a financial sum, and the HSE admitted liability.

“So if the rights of the unborn are swept away, as they will be if people vote Yes, as lawyers if we were in a similar case we wouldn’t have that argument,” he said.