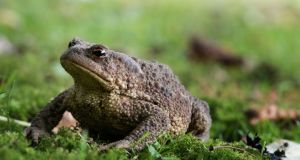 Trevor the toad was found in south Dublin and is now in the care of the HSI. File photograph: Getty Images

Rob Gandola, senior science officer with the Herpetological Society of Ireland (HSI) has told of the importance of having a common toad in captivity to determine their impact on native wildlife populations.

Trevor the toad is not native to Ireland, but was found in south Dublin. He is now in the care of the HSI where staff are awaiting his first bowel movement with great interest so they can determine what he has been eating.

The Toad in the Hole campaign was launched in June asking people in local communities to keep an eye out for common toads. “Trevor was the first one that’s been collected and submitted to us as part of this campaign, generally Stepaside seems to be our ground zero,” Mr Gandola told RTE radio’s Morning Ireland.

“Trevor is now going to be the face of the Toad in the Hole campaign, essentially the entire project does not work without the support from the local communities, so it’s a really big deal that Trevor was found and he’s made his way to us.

“We definitely think there’s more, the problem is we don’t know how many more there is and how far they’ve spread out among the foothills of the Dublin mountains. Why we want to find them is that they’re not native to Ireland. We don’t know what effect, if any, they’re having on native wildlife populations.

“We don’t know if they’re vectors of any of these big amphibian diseases that are rife within Britain and the rest of Europe. So it’s very important that we get a handle on very basic things like population size, population structure and what they’re eating and down to whether they’re disease carriers or not.”

He explained that the Irish Natterjack toad is native to Kerry and the the easiest way to tell the difference between a common toad and the native Natterjack toad, is the Natterjacks will have yellow stripe running down the middle of their back.

“They are easy to distinguish, as far as we know there are no common toads anywhere near Kerry which is wonderful. But it terms of how to tell them apart from common frogs, toads have much more warty skin, two big glands at the back of the eyes, they’re very obvious look like two oval raised protuberances.

“We’ll have to wait for him to take a big poo to know what he’s been eating. That’s as simple as it is, toads, like most reptiles and amphibians tend to take large poos, as disgusting as it seems, we can use the pellet that comes out, we can go through it and we can find ... we have to wait.

“That’s where having Trevor in captivity is quite easy and important, finding toad poo in the open is almost impossible.”

First look: Spectacular supermoon due in Irish skies this week 21:23
Coronavirus: Renewed appeal not to travel ahead of Easter weekend 21:18
Government announces funding for ferry routes threatened by Covid-19 21:09
Department of Health agrees memo with the North on Covid-19 21:01
Coronavirus: Need to ‘double down’ on restrictions after record deaths 20:53