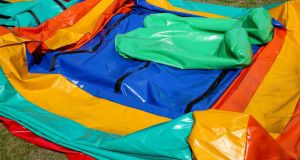 A lack of competition in the insurance market and excessive compensation payments are to blame for difficulties with getting cover for bouncy castles, business owners have said.

It emerged last week that small bouncy castle businesses may have to pull the plug on their inflatables for good if an alternative to UK-based LeisureInsure is not found, businesses have said.

Its underwriter, Axa XL, has decided to end cover in Ireland because it is no longer viable, sources in the Irish bouncy castle industry have said.

The withdrawal of cover will impact businesses big and small and hire firms are already counting down to the day their current policy runs out.

Owen Russell, owner of Crazy Bounce in Rhode, Co Offaly, spoke about his concerns after delivering a castle to a local family and a football shooting gallery to a gym in Tullamore.

“My renewal is not until April of next year, but if the renewal doesn’t come, no other insurance company is doing it, it’s only LeisureInsure,” said Mr Russell. “There’s no competition, that’s the problem.”

Crazy Bounce is a member of the Irish Inflatable Hirers Federation (IIHF), a representative group for operators that assists its members with training.

“You do a day course with the IIHF, from 9am to 4.30pm and it’s a whole course on the rights and wrongs,” he said.

Members are given information on best practice, such as when an inflatable should be turned off in high winds and how many can use a unit at the same time.

“But seemingly it’s not worth the paper it’s written on,” Mr Russell said.

Premiums vary depending on the size of the business and the number of inflatables being hired out, but Russell estimates it would cost the “guts of €500” to add a large, 52ft slide to an existing policy.

Operators hire castles out for as a little as €90 per day but larger units could cost several hundred euro.

Another operator said public liability cover of at last €6.5 million was required when castles were used in festivals and shows.

“We’re covered at the moment because the policy still stands but it’s next year that’s the problem,” they said, blaming a culture of excessive compensation payments for the problem.

IIHF head Gerry Frawley, has said the withdrawal of cover could result in operators working without insurance.

Axa XL has said it will not be renewing its Irish business as of August 1st.