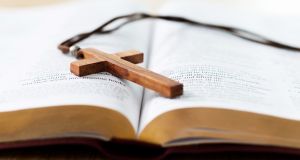 Fr Router said he was ‘sharply aware’ that some people don’t share the ‘same positive experience of church that I have’. Photograph: iStock

Fr Michael Router was ordained as auxiliary bishop of the archdiocese of Armagh at St Patrick’s Cathedral in Armagh city on Sunday.

The archdiocese, which straddles the Border, includes almost all of counties Armagh and Louth, about half of Tyrone and parts of Derry and Meath. It consists of 61 parishes and has a population of more than a quarter of a million Catholics.

Fr Router, who had been serving as parish priest of Bailieborough (Killann) in the Diocese of Kilmore, was appointed auxiliary bishop by Pope Francis in May, assigning to him the Titular See of Lugmad.

The role of an auxiliary bishop is to assist the diocesan bishop in meeting the pastoral and administrative needs of the diocese. The Titular See of Lugmad is an ancient episcopal see in Co Louth.

In his first address as bishop, Fr Router said he was “sharply aware” that some people don’t share the “same positive experience of church that I have”.

“The institutional church in this country, from the mid-19th to the mid-20th century, did not adequately challenge the social divide that existed in society.

“Despite the pioneering work of many church personnel in the fields of education and healthcare, it did not adequately defend, in the way it should have done, the rights of the poor and vulnerable,” he said.

“The Irish church’s mistakes and failures have caused deep hurt and pain to many people and we must remember and acknowledge that, while we celebrate here today, many people have turned their backs to us and walked away.”

Archbishop Eamon Martin, the principal consecrator, said Fr Router will find life as a bishop to be “fulfilling and interesting, although not without its challenges”.

“The role and ministry of a bishop has changed immensely since the appointment of the first auxiliary bishop to Armagh, Bishop William Conway, who came to us from Down and Connor more than 60 years ago.

“The burden of administration has grown much heavier since then, and the needs of our people, priests and society have become more complex,” he said. “The church’s teaching on many important social and moral issues, including marriage and the sacredness of all human life, has become increasingly countercultural.

“With the decline in religious practice and fewer vocations to the priesthood and consecrated life, we have once again entered ‘mission mode’ here in Ireland, and sometimes it’s difficult to discern precisely where the Holy Spirit is leading us.

“However, despite all this change, the fundamental calling of the bishop remains as it has been handed down to us since the earliest days of the church.”

Auxiliary Bishop Router is a native of Virginia in Co Cavan. He was born 1965 and educated in Virginia National School and in Kells CBS before graduating with a bachelor in divinity degree and a higher diploma in education from Maynooth in 1982.

He began his ministry as a curate in the parish of Killinkere and in 1991 joined the teaching staff of St Patrick’s College, Cavan. He was appointed chaplain of Bailieborough Community School in 1996 and priest in residence in the parish of Kilmainhamwood and Moybologue.

During his time as diocesan director of Adult Faith Formation, he wrote a regular column on religious matters in local newspapers the Anglo-Celt and the Cavan Voice.

Archbishop Jude Thaddeus Okolo and Bishop Leo O’Reilly were the co-consecrators. The Church of Ireland was represented by Archbishop Richard Clarke, and Rev Louise Donald represented the Methodist Church.