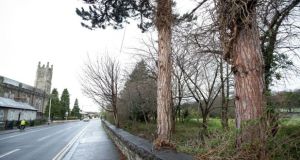 The site at Springvale in Chapelizod opposite the Church of the Nativity. Photograph: Tom Honan

Dublin City Council has dropped plans to use emergency powers to build more than 120 social homes without seeking planning permission on two sites on the south side of the city.

The council has lodged applications for six blocks of 71 apartments beside the Phoenix Park in Chapelizod and two blocks of 55 apartments on Cork Street in what will be among its first prefabricated apartment developments in the city.

It had planned to build the apartments without lodging a planning application by using emergency powers introduced by the Government to deal with the housing and homelessness crises.

Under these provisions the council does not have to go through the normal planning process for local authority developments, known as the “Part 8” process, if the council chief executive determines there is a need to deal urgently with “an emergency situation calling for immediate action”.

However, local residents in Chapelizod earlier this year objected to use this power for a site at Springvale opposite the 19th century Church of the Nativity, as it offered no opportunity to lodge objections to the development. Chapelizod residents’ groups had threatened to seek an injunction if the council started construction without submitting a planning application.

The council’s head of housing, Brendan Kenny, said the process of using the emergency measures was proving slower than expected.

“It was our original intention to use the emergency planning but we changed out mind as it was being delayed between ourselves and the department [of housing] .”

He said while the process had worked for the modular houses, which were smaller, lower-cost schemes, using emergency powers for the larger apartment developments was proving more complex.

“Because the capital cost would be over €100 million for the bundle there would have to be a cost benefit analysis, but that doesn’t come into play with the Part 8 process.”

Mr Kenny also acknowledged the plan to use emergency powers had been “fairly controversial” locally. “It was clear if we had gone down the emergency planning route there would have been a lot of opposition.”

Under the Part 8 process the public have six weeks to examine the council’s proposals and make submissions. A report is then prepared by the chief executive, but the councillors decide whether to grant permission for the development.

Chapelizod Residents’ Association chairman John Martin said while he welcomed the decision not to use emergency planning he was concerned the council had already determined the outcome of the planning process.

“I accept that they have at least listened to the voices of democracy, but in my opinion the chief executive and city councillors are not entering the Part 8 process for Springvale impartially and are already prejudiced to its outcome.”

He said the association would be lodging objections to the scheme. “I would be encouraging households and individuals to make submissions also. What is needed on this site is a mix of affordable purchase, affordable rental and social housing, not 100 per cent social housing.”