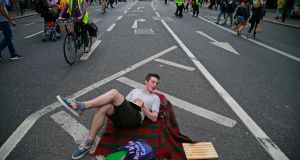 For the first time, the council closed College Green to traffic for a day. If the theory was to replicate the great pedestrian plazas of European cities, the reality was a profusion of metal barriers, traffic cones and security guards which made the whole area look to the casual visitor like a building site.

Painted tents opposite the Bank of Ireland building were the only colour on show as grey skies and heavy rain showers kept the crowds away.

Cyclists were funnelled into a narrow corridor opposite the Bank of Ireland and ran the gauntlet of passing pedestrians.

Even those who embraced the concept were nonplussed by the chain of steel barriers which ran the length of Dame Street to no obvious purpose, and the reaction on social media was not much better.

“We got notice from the council saying there is a festival on. There’s nothing. It’s all barriers. People are confused,” said Catherine Keogh, the owner of Keogh’s cafe on Trinity Street. She said footfall was down considerably on other Sundays.

Dublin City Council said there were extra barriers in place earlier on Sunday morning to limit delivery vans entering the Dame Street area but that these were removed later in the day.

Luke Brabazon and his friends had a picnic on the street in front of the Bank pub. The barriers, he believes, are a symptom of a greater malaise.

“We want people to be creative in using the city, but it is curtailed by so much bureaucracies and insurance forms. You can’t actually experiment.”

The pedestrianisation of College Green is a good idea in principle, he said, but the whole concept will need work over the next two Sundays when the experiment will be repeated.

“Aspects of it are disappointing, but I don’t think the end result is. Everybody is getting an idea of what the street might look like.”

Maeve Stone and her friends made the best of it by staging a game of boules on the street. She scratched the name of the winners on a road surface which would normally be choked with traffic even on a rainy summer Sunday.

Despite the scepticism of many, she believes College Green can work. “We have got incredibly intelligent urban planners and there are solutions to the problem. The barrier is people not believing it is possible.”

Inside the cordon, people sat around on chairs enjoying the novelty of being able to sit down and repose in the middle of one of Dublin’s busiest thoroughfares.

The streets were covered in children’s doodles as there was free painting lessons on site in three tents erected on College Green.

Eilis Moloney from Terenure and her sister Mary brought their four children to College Green for the day. “I haven’t researched the negatives on it, but it’s lovely to be able to enjoy the town and look at all the lovely architecture,” Eilis said.

College Green was not entirely free of traffic as a narrow corridor opposite Trinity College Dublin was kept open for buses and the Luas, but heavy traffic was conspicuous by its absence from the city on a Sunday afternoon.

Taxi drivers remain hostile to the idea. One told The Irish Times that the circuitous route he had to drive from Dame Street to Dublin Airport added another €10 to the taxi fare.

“It won’t work. It’s going to stop people coming into the town. The ordinary punters are not going to come in. They are going to go to Liffey Valley instead.”

Another, who did not want to give his name, said the closure of College Green caught early morning motorists by surprise and it took him 20 minutes on Sunday morning to get from Wood Quay to O’Connell Bridge, a journey that would normally take five. “The whole thing is a joke anyway. Try it Monday to Friday. It will be chaos.”