The 2017 San Francisco Rose, Amanda Donohoe, shares her personal story of the Berkeley tragedy, where her sister and cousin both lost their lives when a balcony collapsed in 2015. Video: RTÉ 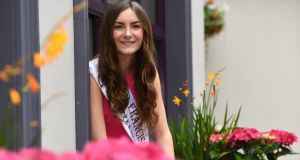 San Francisco Rose Amanda Donohoe: “It’s definitely brought huge light to our lives and we are in a better place as a family.” Photograph: Domnick Walsh

The San Francisco Rose, who lost two family members in the Berkeley balcony tragedy, said the Rose of Tralee has been “monumental to the healing process”.

Amanda Donohoe’s sister Ashley Donohoe (22) and cousin Olivia Burke (21), from Dublin, were among six students who died after an apartment balcony collapsed in Berkeley, California on June 16th, 2015.

The 20-year-old, whose parents are both from Dublin, was speaking before taking to the stage at the opening night of the Rose of Tralee.

“I think it’s [the competition] been very, very good for us,” she said.

“It’s definitely brought huge light to our lives and I do want to say that we are in a better place as a family, extended and immediate after this festival because we’ve gotten more out of it than I would have ever hoped with how close we’ve gotten, how much I’ve gotten to see my family.”

Ms Donohoe, who is studying physics at the University of Nevada, said she received a moving card on Monday morning from a woman whose daughter was being bullied.

The mother had been prompted to send the card after Ms Donohoe spoke about being bullied on RTÉ’s Ryan Tubridy Show earlier this month.

“I primarily focused on getting back up and moving forward. So the card kind of [asked] would you be willing to write to her and possibly mentor,” she added.

“I was sitting in my room, I had a solid cry and it’s just something that I found absolutely phenomenal . . . It’s definitely something I will be following up on and incredibly honoured to be asked to do such a thing.

“It was a very moving morning and honestly something that I will look back on with my time in Tralee.”

Ms Donohoe said she was encouraged by family members to enter the competition having watched it as a child during summers spent in Ireland.

“It’s honestly been surreal, I think that’s the best word for it. I’ve gotten so close with all of these incredible women . . . It’s just been a very memorable and amazing time.”

Her sister and cousin died along with four other Dublin students – Eoghan Culligan, Lorcán Miller, Nick Schuster and Eimear Walsh, all aged 21 – when the fourth-floor balcony they were standing on collapsed during a 21st birthday party.