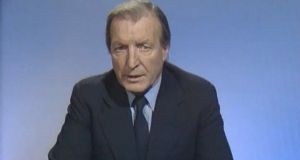 Charles Haughey: back in 1962, when he was minister for justice, he charged the Interdepartmental Committee on the Prevention and Treatment of Offenders with investigating the links between parentally deprived children and repeat offences. Photograph: RTÉ screen grab.

An initiative by the late Charles Haughey 55 years ago to address the needs of juvenile delinquents was recalled at the Parnell summer school in Co Wicklow.

He said the first significant changes to State thinking on the needs of delinquent children and adults included contributions from psychologists and an interdepartmental committee set up by Haughey when he was minister for justice in 1962.

A key issue for the judiciary at the time was that there was nowhere for them to send disturbed children, other than to reform schools.

Dr Byrne said one district court judge had complained he had sent 57 “mentally defective boys” to industrial schools between 1957 and 1962.

Around that time, he said, the “radical Jesuit” Fr Michael Sweetman suggested that some form of family influence, involving parental figures, should be maintained for children in industrial schools, given the poor outcomes for many of the children in care.

But Dr Byrne said the first significant shift in Government thinking was brought about by the setting-up of the Interdepartmental Committee on the Prevention and Treatment of Offenders by Haughey in 1962.

Haughey as minister for justice had charged the committee, particularly, with investigating the links between parentally deprived children and repeat offences. A key issue for the committee was the care of children in small groups which had parental figures. But Mr Byrne noted a number of religious institutions had complained about the expense of the State’s first psychiatric unit in a prison – in Mountjoy Prison in 1964.

He said the Kennedy report in 1970 had signalled a significant disenchantment with the care of children in Ireland, and its recommendations included the closure of inadequate institutions.

The report also argued the emotional and mental wellbeing of children in care should be catered for, and psychological and psychiatric assessment should be provided.