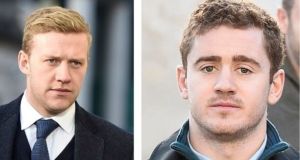 Ulster Rugby chief executive Shane Logan said he did not believe Paddy Jackson or Stuart Olding (both above) would ever play for Ireland or Ulster again.

The head of Ulster Rugby has said he does not believe Paddy Jackson or Stuart Olding, who were last month found not guilty of raping a Belfast student, will ever play for Ireland or Ulster again.

Speaking after the men had their contracts revoked at the weekend, Shane Logan said money or pressure from sponsors did not drive the decision to sever ties with the players.

“No sponsor including Bank of Ireland drove the decision,” he added. “We have taken on board everybody’s views right across society, right across our supporter group, our sponsor group, our players, clubs, volunteers, we are part of society.

“But at the end of the day, having looked at all those things, the decision was based on alignment with what it is we stand for, in particular the value of respect.

“The players themselves admitted in their own statements that they were way short of what was expected of them.”

Jackson (26) and Olding (25) were found not guilty of raping the same woman in June 2016. Jackson was also unanimously acquitted of sexual assault.

The high-profile trial which ran for nine weeks at Belfast Crown Court brought to light a number of sexually explicit and offensive text exchanges which sparked a wave of protest on social media and on the streets.

Asked about the men’s chances of playing for Ulster again, Mr Logan said “that is not something that is being envisaged”.

Asked about their chances of appearing for Ireland, he said: “The position is joint. It’s a joint Irish and Ulster rugby position...The statement is clear and it is not something that we are contemplating.”

Mr Logan rejected a suggestion that the pair were hung out to dry by their club and country and denied caving into online pressure. He said he believed both men had made a “serious mistake” but he hoped they would find success elsewhere.

“They have done a lot for Ulster and Irish Rugby,” he told the Press Association. “They have made a very serious mistake...I hope that they will learn from that and I hope they fulfil their potential going forward.”

Jackson had been linked with a move to French side Clermont following his release but the club’s head coach Franck Azema on Monday said in a statement that the parties were not in contact and his club had “no desire” to sign the out-half.

Meanwhile, the official Ulster Rugby Supporters Club (URSC) is canvassing its 1,000-strong membership on what possible protest action it could take over the province’s treatment of Jackson and Olding.

It has been suggested that fans could cancel season tickets and even protest at Ulster’s next match, against Glasgow at the Kingspan Stadium, on Saturday.

A statement on the group’s website encouraged members to respond to a questionnaire it has circulated “to help the committee accurately reflect the feelings of URSC members and act accordingly”.

Former Ireland international Paddy Wallace, who represented Ulster from 2001-2014, said a “strong section” of fans were upset the players had been let go. He said the pair would have liked to stay on at Ulster but he believed they had “accepted circumstances won’t allow that”.

He said he had been subjected to online complaints from people accusing him of “apologising for the behaviour”.

“I am not,” he said. “I am just giving an indication of how fans feel. It is not black and white.”