Irish Rail drivers will reject pay offer for past productivity, according to unions 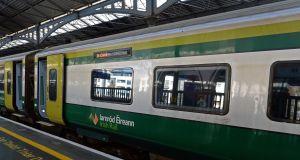 The National Bus and Rail Union said Iarnród Éireann staff were unhappy their voucher could only be used at one retailer. Photograph: Eric Luke

A row over a tax-free €500 voucher for staff at Irish Rail, which formed part of a settlement to a dispute at the company before Christmas, could lead to further industrial trouble on the railways in the weeks ahead.

The National Bus and Rail Union (NBRU) said staff at the State-owned rail operator were unhappy that the voucher could only be used at one retailer and also that they had to sign up to an Irish Rail email account to access it.

Drivers at the company are currently balloting on a deal involving a 1.15 per cent pay rise for past productivity in return for the introduction of new mandatory arrangements for mentoring trainee drivers.

However, NBRU general secretary Dermot O’Leary said, based on feedback from members, “the voucher debacle would lead me to deduce that this ballot will go down”.

He warned that if the proposed deal was rejected next week, any move by the company to force through new mentoring arrangements could lead to further industrial trouble.

Siptu organiser Paul Cullen said: “There is such a level of dissatisfaction among our members at the attitude displayed towards workers by the CEO of Irish Rail, David Franks, that there is a strong likelihood that this offer [the 1.15 per cent rise for past productivity] will be rejected.

“This is indicative of the dire state of industrial relations within Irish Rail. This situation does not bode well for industrial peace at the company during 2018.”

Thousands of Irish Rail passengers faced disruption towards the end of last year when its 3,800 staff staged two 24-hour strikes in a separate dispute over pay. The provision of the €500 voucher for Dunnes Stores formed part of the Labour Court recommendation to resolve the strike.

The NBRU on Wednesday also placed the blame for recent industrial problems on the railways on management headed by Mr Franks.

“It is no accident or coincidence that Irish Rail/Iarnród Éireann enjoyed nearly 14 years of industrial peace from 2000 to 2014, before the arrival of the current CEO. We have now seen three separate disputes in 2½ years. Further evidence of the disdain that the Franks-led management team have towards staff was demonstrated over Christmas, when it decided to ignore the consensus of its own board by restricting the Labour Court recommended voucher to one outlet.

“All this coming at a time when they knew full well that train drivers were balloting on potential changes to the current training regime. The responsibility for any negative influence on this ballot will rest four square with Iarnród Éireann management and may even have the potential for further industrial flashpoints in early 2018.”

Siptu called for a review of expenditure on all non-core activities by Irish Rail after The Irish Times revealed the company chairman Frank Allen had privately criticised a €20,000 sponsorship of a fishing competition in Northern Ireland as an “own goal” .