The storm Eleanor clean-up operation is underway in Galway, areas of the city were flooded after the storm lashed the west coast with strong winds and high waves. Video: Joe O'Shaughnessy 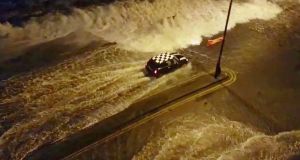 Home and business owners in Galway are counting the cost of the devastation caused by flooding during Storm Eleanor, which is expected to run into millions of euro.

Local authority management have been accused of failing to act on warnings by the Office of Public Works.

High tides, torrential rain, a swell on Galway Bay, surging water levels on the river Corrib and storm-force winds combined to wreak havoc on the Docks and Spanish Arch areas of the city, as well as along Salthill Promenade.

According to the National Emergency Co-ordination Group, the Office of Public Works informed all coastal local authorities at 11.46am on Tuesday of an extremely high spring tide.

“The city council were given the information by Met Éireann and the OPW that strong winds were going to combine with high tides and heavy rain, yet they failed to prepare. The council said on Tuesday afternoon that no serious flooding was expected.

“At 5pm we got some of the worst flooding I can recall in Galway. There were areas which I have never seen flood before. And then the council came along with sandbags five hours later.

“The authorities should have been prepared; they failed to act on the information, and left people exposed. It’s unlikely the flooding could have been completely prevented, but it could at least have been alleviated.”

City Council chief executive Brendan McGrath described the devastation as “unprecedented”, and that nothing could have predicted the level of surge waters.

A council spokesman said there was an urgent need for permanent flood-mitigation measures to be put in place.

Minister of State for the Office of Public Works and Flood Relief Kevin “Boxer” Moran, who visited Galway on Wednesday morning, said temporary measures were not sufficient to deal with the intensity of the flooding which had occurred.

He said Galway city was one of 47 schemes approved for special permanent flood defences, and he pledged to “do what was necessary” to get these under way as soon as possible.

A homeowner at Raven Terrace near Spanish Arch told how his home had been destroyed for the third time in three years, and voiced his anger that there had been no advance warning.

“It’s destroyed again, completely destroyed. It was destroyed three years ago twice, this is equally as bad. It’s way worse than Ophelia. There was no warning.”

Dozens of cars in the city centre were badly damaged or written off by the flooding. In Salthill at least six cars were destroyed in Toft Carpark when they became submerged in flood waters.

One motorist who was driving along Galway Docks at about 5.30pm described the sense of panic during the peak of the floodwater surge.

“People were just trying to get to safety. There was a real fear if a car stalled or had to stop that you’d be stranded, and it all seemed to happen so quickly.”