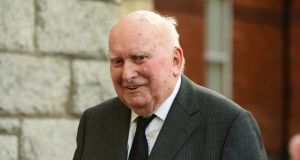 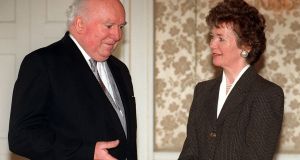 Former Supreme Court justice Donal Barrington, one of his generation’s foremost experts in constitutional law, has died at the age of 89.

He attended St Patrick’s primary school, Drumcondra, and was a graduate of Belvedere College and University College Dublin. The Dubliner also studied at King’s Inns and was called to the Bar in 1951. He became a senior counsel in 1967.

After a career as a highly respected barrister, Barrington was appointed to the High Court in 1979 and the European Court of First Instance in Luxembourg in 1989 before becoming a judge of the Supreme Court in 1996. He retired four years later.

During a distinguished career that spanned six decades, he was the first president of the Irish Commission on Human Rights and served as chairman of the General Council of the Bar of Ireland from 1977 to 1979.

He was also chairman of the Barristers Professional Disciplinary Appeal Board and one of the founder members of the Irish Council of Civil Liberties.

Despite being one of the best-known judges of the past half-century, it was Barrington’s work as a pioneering barrister fighting for the underdog that carved out his reputation in the Irish courts.

Barrington represented May McGee, a mother of four from Swords in north Dublin, before the Supreme Court in a 1973 case that found the legal ban on importing contraceptives infringed the constitutional right of a married couple to privacy. The victory was considered a major breakthrough in family planning in Ireland.

In one of the most groundbreaking cases taken during his time in law, Barrington won a case for Co Wicklow nurse Kathleen Byrne, successfully arguing that an Irish citizen could sue the State.

The 1972 Byrne v Ireland ruling abolished the State’s immunity, a carry-over from the British regime when the Crown was considered sovereign and therefore subject to no wrongdoing.

Barrington was unsuccessful in a 1965 challenge taken by a London café owner Leon Nicolaou who wanted the Adoption Act 1952 deemed unconstitutional because it allowed the State authorities to make an order on the adoption of his daughter with a Galway woman without hearing the view of the child’s natural father.

The ruling was regarded as one of the worst by the Supreme Court and is primarily remembered as the case in which the court spelled out that the family under the Constitution was grounded in marriage.

He represented priest and professor FX Martin in the battle to save Wood Quay in Dublin in the 1970s in one of the most high-profiles cases taken to protect an archaeological site anywhere in Ireland. His junior barrister in the case was Mary Robinson, the future president of Ireland.

On his receipt of a honorary doctorate from the National University of Ireland in 2009, Barrington was described as having “led a revolution in constitution law” and been “a human rights champion before human rights were generally acknowledged as an issue, still less a field of study or work.”

Barrington was the son of Thomas Barrington, a Department of Agriculture civil servant, and Eileen Bracken, daughter of sculptor JK Bracken. His father died while representing Ireland at an overseas conference when Barrington was still toddler.

The young Barrington won scholarships to both Belvedere College and UCD and through his interest in debating, in both English and Irish, at Belvedere he developed an interest in the law.

During his years as a barrister, he was a founder member and first president of Tuairim, a think tank that explored and opened up debate on social, political and religious issues affecting Ireland of that time.

A speech that Barrington delivered in the late 1950s and subsequent pamphlet on developing better relations in Northern Ireland influenced thinking and helped pave the way for the 1965 meetings between then taoiseach Sean Lemass and Northern Ireland Prime Minister Captain Terence O’Neill.

Barrington later worked as a legal adviser to the John Hume and Austin Currie of the SDLP in the 1970s after the collapse of the Sunningdale Agreement that attempted to establish powersharing in Northern Ireland.

President Michael D Higgins paid tribute describing Barrington as “one of the outstanding minds and voices in Ireland’s legal profession”.

“He leaves a rich legacy in public and constitutional law, having consistently brought attention to the importance of civil and political rights, not just in Ireland but also abroad.”

The former judge is survived by his wife Eileen; his four children Kathleen, Kevin, Eileen and Brian; sons-in-law Niall and Cathal; and his four grandchildren Oisín, Fiona, Oscar and Vanessa.