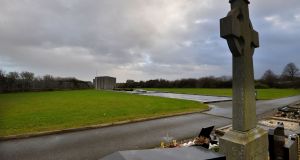 The St Paul’s section at Glasnevin Cemetery, Dublin, where the crematorium chapel was to have been built. Photograph: Alan Betson

A plan to build a chapel over an old burial plot containing the graves of more than 3,000 babies and 855 adults at Glasnevin Cemetery in Dublin has been withdrawn following opposition.

Glasnevin Trust was granted planning permission to build a new crematorium chapel in the St Paul’s section of the cemetery, within an area known as the “Poor Ground”. It was intended to commemorate the 232 citizens of the capital who died in the 1916 Rising. The plans also included provisions for a car park and walled garden.

An earlier application to build a chapel was refused by Dublin City Council in May last year due to the “highly sensitive” nature of the site. However, the council granted permission for the project following a second application in November, with a number of conditions.*

The graves within the footprint of the proposed chapel were opened in 1910, with the final burial taking place in 1914, according to the trust.

Burial records during the 1910-1914 period include many for babies found dead at just a day old , as well as children who died of conditions such as pneumonia.

An appeal against the planned crematorium chapel, which was to be given €2 million in funding from the Government, was lodged last month by Dublin-based undertaker Alan Harmon of Bourke’s Funeral Directors.

Galway historian Catherine Corless told The Irish Times she also planned to lodge an objection to the construction of the chapel. Ms Corless’s work was instrumental in the identification of the discovery of the remains of nearly 800 babies and infants under the site of a former institution for unmarried mothers in Tuam, run by the Sisters of Bon Secours.

Archbishop of Dublin Diarmuid Martin said he had received correspondence from people concerned about the development and he shared their concerns “that there could be building over the graves of men, women and children”.

Dr Martin said that “to ignore the fact that, in particular, there were children buried in the area, without any indication as to why they are buried there and especially as concerns could arise as to how they died, would be highly insensitive”.

The archbishop said situations in other parts of Ireland “would indicate the need to be particularly sensitive to places where children are buried and the sacredness of their burial place. At the very least, some form of memorial should be considered indicating who was buried there,” he said.

In a statement on Wednesday evening, the trust, which manages the cemetery, said that following a meeting it had decided not to proceed with the proposal.

The trust said the area of the proposed chapel was “totally separate to, and does not involve in any way, the ‘Angels Plots’ which are situated in the old section of the cemetery and which have been restored over the past number of years”.

It said “a detailed archaeological survey had been made of the site, in conjunction with a detailed engineering survey, to ensure no disruption would be caused to graves, following which Dublin City Council had granted approval for the project to proceed, with certain stipulations”.

“The trust has taken the view that, given the opposition to the concept, the original vision for the memorial as a centre of reconciliation – to serve as a monument to all of those who are interred in unmarked graves in Glasnevin Cemetery in a spiritual, contemplative and peaceful space – cannot now be achieved. Consequently, its decision is not to proceed.”

The trust said it would “consider other avenues through which the citizens who lost their lives in the 1916 Rising and all those interred in unmarked and unpurchased graves might be remembered”.