Carlow Rose Shauna Ray Lacey says she hopes "to make a difference" after discussing her parents' addiction to heroin as part of her on stage interview at the Rose of Tralee festival. Video: RTÉ/Ronan McGreevy 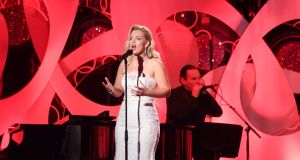 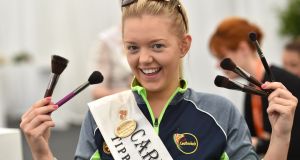 Carlow Rose Shauna Ray Lacey having her makeup done for the final night of the Rose of Tralee festival at the Dome, Tralee. Photograph: Domnick Walsh/Eye Focus

Carlow Rose Shauna Ray Lacey managed to keep news about her heroin-addicted parents from her fellow Roses until she revealed it on stage at the Dome in Tralee.

Ms Ray Lacey stunned a television audience on Monday night with her admission that her late father Francis and her mother Angela had been heroin addicts when she was growing up in Carlow.

It was the best kept secret in Tralee. She had told the judging panel in a pre-interview six weeks prior to the festival, but it did not appear in any of the pre-publicity and she did not tell any of her fellow Roses.

She is now the joint favourite with the bookies to be crowned Rose of Tralee. The other favourite is the Waterford Rose Kirsten Mate Maher (21), a student at Waterford Institute of Technology.

Ms Ray Lacey (24) told the Ray D’Arcy Show on Wednesday that there were times growing up when she had to get her brother Luke out to primary school because her mother had not woken up.

“Every day you got up for school and you were wondering when you are walking home will Mammy be waiting at the gate for you,” she said.

Ms Ray Lacey said her father and mother were functioning heroin addicts. Her father died four years ago. He had been clean for two years prior to his death, but succumbed to an infection following heart surgery.

Her mother, Angela, went for two months rehabilitation on the day that Ms Ray Lacey announced she was pregnant with her daughter, Emmy, who is now three. A passionate advocate of breastfeeding, she is still breastfeeding her daughter and donated some milk to other mothers after Emmy was born.

Her mother has now been clean for four years having received treatment at Lá Nua, a drug rehabilitation clinic based in Carlow town.

Both mother and daughter appeared together after her appearance on the stage at the Dome in Tralee on Thursday night. Angela said she was proud of what her daughter had achieved.

The pair had agreed that Ms Ray Lacey would speak about her addiction on live television.

“You are not who your parents are,”Angela said. “The freedom to be able to speak your mind and not to feel judged at all I think it is the most powerful thing. I’m absolutely speechless. I don’t care who judges me any more. The freedom of that is amazing.”

Angela explained she had gone from alcohol addiction to heroin addiction at the age of 31.

“I was lost at that point in my head. I found it hard with the daily thing and it is so easy to access it. It took away any pain and any feeling.”

Ms Ray Lacey was one of 17 Roses who appeared on Monday night, with 15 to follow on Tuesday. They were chosen to participate from the 57 Roses who made the trip to Tralee this year.

The other favourite, Ms Mate Maher (21), who is half Zambian, said she felt frustrated that so much attention had been paid to the colour of her skin.

“They just touched off one little teeny part that was me when there are thousands of other things about me that are there to be spoken about,” she said.

“You need to look past what we look like or the colour of her skin, hair, religion or anything like that. We are all the same.”

The winner will be announced in the Dome on Tuesday evening.