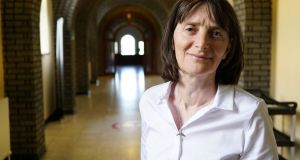 Anne Griffin was the first to be employed after Dublin was confirmed as the venue for the Meeting of Families. Photograph: Enda O’Dowd

The beating heart of the World Meeting of Families is behind the high wall around a former seminary in the shadow of Croke Park in Dublin.

The Holy Cross College on Clonliffe Road is where thousands of volunteers have been vetted and marshalled, more than half a million tickets dispersed, hundreds of speakers organised and countless queries from media all over the world dealt with.

In the lead-up to this week’s events, the World Meeting of Families has been taking up three floors of the granite building, which also serves as the administrative headquarters of the Catholic Archdiocese of Dublin. However, the organisers started out in a single room in the sprawling complex.

And while there are now 57 full-time staff and hundreds of volunteers working for the organisation, once there was one.

That person is Anne Griffin, the first to be employed after Dublin was confirmed as the venue for the event at the climax of the World Meeting of Families in Philadelphia in September 2015. She was reprising a role she had played for the Irish Eucharistic Congress in Dublin in 2012.

She officially started work in April 2016 and her first job “was to set about building structures, we had to set up a company and that company had to have all the legal structures required so that we could sign contracts and make arrangements with providers”, she says.

At the outset she was based in “a very small office” and had no idea where she was going to put all the people who she knew were needed to make the World Meeting of Families happen. But then the Mater Dei Institute which had been based at Holy Cross moved to a space in DCU and suddenly offices were freed up. The next problem was what to put in them.

“All the furniture was donated to us and most of the IT too,” Griffin says. “We did have to get the place painted and we had to get email and telecoms installed and we had to keep costs down.”

She mentions money repeatedly. “Every penny has had to be accounted for,” she says. “We are a registered charity and every penny mattered. We got three quotes for everything and when we spend any money our first question has always been can we get this cheaper or can we get this free.

She says they have paid “well below market price for everything and people have been very generous”.

And why would people be generous given the enormous wealth at the Catholic Church’s disposal? “It is either because the suppliers have faith or because they have a personal regard for Pope Francis or sometimes they recognise this event as a great opportunity for Ireland to show what it can do on the international stage when it comes to organising an event like this.”

One of the reasons why that might be true is because the world meeting is a big deal. In fact, the Mass in the Phoenix Park is the biggest outdoor event taking place in Europe this year. While the big draw for the World Meeting of Families is Francis, when Dublin was originally confirmed as the venue for the event, his presence was by no means a given.

“We always had the hope that the pope would attend but it was by no means certain,” Griffin says.

It was confirmed only earlier this year, after which the organisers had to ramp up what they were doing. In addition to a three-day pastoral congress in the RDS and a major climax in Croke Park involving 85,000 people, there was a papal Mass in the Phoenix Park to organise.

It remains to be seen how well that challenge will be overcome but what is certain is anyone planning to go to the big Mass will need to be prepared for a long walk, a lot of standing around followed by a lot more walking. The World Meeting of Families has said that people should allow at least eight hours from the moment they leave the bus which drops them at one of the “transport hubs” which have circled the Phoenix Park to the moment they get back on the bus when the event ends.

While Griffin is the general manager, Fr Damian McNeice is the master of ceremonies. Like Griffin, he will be reprising a role he played for the Eucharistic Congress in Dublin in 2012. “I thought that was a once-in-a-lifetime thing and it was quite a surprise when we were given this event,” he says.

“I’ve been working on this solidly for a year and a half and the sheer scale of the Phoenix Park Mass is the biggest challenge, it is just vast.”

He is clearly quite keen on meeting the man who will be headlining the main event. “I have never met the pope but I have been close to him, maybe 10 yards away,” he says. “I might get to meet him this time.”

But the World Meeting of Families is not about one man, even if he is the pope. For many people, the three-day event at the RDS, which started on Tuesday and will be attended by more than 37,000 people, is a bigger deal. There will be keynote addresses, round-table discussions, symposiums and special events aimed at the 27 per cent of the audience who are children.

The speaker programme manager is Hannah Evans and her job has been to recruit and co-ordinate almost 300 speakers from all over the world.

Among those speakers is former Irish international rugby player Ronan O’Gara, former Manchester United footballer-turned-priest Philip Mulryan and celebrity chef priest Fr Leo Patalinghug who has set up a movement called Plating Grace which aims to bring families back together around the dinner table.

He will also be giving children karate lessons.

Then there is the sustainability co-ordinator Jane Mellett who has worked on all environmental aspects of the event and has been charged with ensuring that there is no trace of the event left behind once everyone has gone home. She also spent the guts of a year tweeting Pope Francis’s environmental encyclical, Laudato si’, to US president Donald Trump line by line. “I figured he must not have read it when he withdrew from the Paris Accord so I thought I would try and communicate with him through his favourite medium.”

He never got back to her.

At the World Meeting of Families, the work of the volunteers is critical. A week ago hundreds of them were on site in Holy Cross. They were mailing out tickets and answering phone calls from people, many of whom were anxious about how they would handle the papal pilgrimage to the Phoenix Park.

The staff member looking after the volunteers is Richard Brennan. He says he was the “third or fourth person” to join the organisation and is responsible for managing more than 10,000 people, all of whom have had to be vetted by the Garda, an onerous task that has been carried out with some rigour.

“The whole process has been difficult but it has definitely been worth it,” Brennan says. “Communication has always been the most challenging thing for us because so many of the people who want to be volunteers and who want to be part of this don’t have access to email or the internet. That’s why our call centre is so important. I remember when I got the job I used to have sleepless nights because I was thinking, how are we going to get 10,500 volunteers. But we have them now and we are ready to go.”