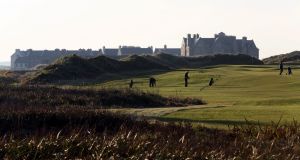 A plan for what has been dubbed Trump’s Pumps motorway service area in Co Clare has been hit with what might be described as a flurry of fake views.

The fakery came to light when people began receiving letters from Clare County Council acknowledging their submission in support of the application and the €20 observation fee sent to the council with it.

About 40 people responded by telling the council they never made a submission and that their signature on letters of support appeared to have been forged.

The planning application is for a motorway service area at junction 12 on the M18 outside Ennis, that Pat McDonagh of Supermac’s wants to build, dubbed Trump’s Pumps by local wags, in apparent acknowledgement of the proximity of the US president’s Doonbeg golf course and hotel. Mr McDonagh wants to mirror the success of his Barack Obama Plaza, at Moneygall in Co Offaly.

The final date for submissions on the application was August 14th. In the run-up to the deadline, some 180 observations were submitted in one tranche, thereby dropping €3,600 to the council’s coffers.

The council said of the 40 who made contact “about their association with the planning application”, 11 have since withdrawn in writing the submission submitted in their name.

In a statement, Supermac’s said there was “considerable local support for the planned development”.

“The essence of the planning process is participation and the debate which has taken place on the company’s proposal to construct a motorway service area at Kilbreckan is evidence that the public has engaged with the process to an admirable extent,” said the statement.