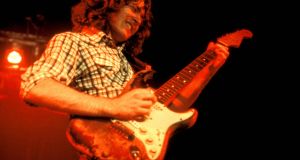 The brother of legendary Irish guitarist Rory Gallagher has lent his support to an online campaign by music fans to persuade Cork City Council to name a new bridge over the River Lee after the late rock and blues musician.

Dónal Gallagher said he was always supportive of anything that continues to keep his brother’s memory and music alive.

He was delighted to learn that music fans had started an online petition to have the new bridge from Merchant’s Quay to St Patrick’s Quay named after Gallagher.

“Any tribute to Rory is fine by me and naming the new footbridge from Merchants Quay across to Patrick’s Quay and the whole MacCurtain Street, Coburg Street and Leitrim Street areas would be a great honour and very appropriate given the importance both areas played in Rory’s early career.

“Rory bought his first electric guitar, his Sunburst Fender Stratocaster at Crowley’s Music Shop, which was located on Merchant’s Quay at the time, and he would also have hung out a lot on MacCurtain Street and that area because our grandmother had a pub there.

“He jammed with The Axills at a place called the Cavalier Club which was at the back of the old Munster Hotel on Coburg Street and later when he formed Taste, they used to play the Cavern Club on Leitrim Street. So naming a bridge linking to the two areas after him would be appropriate.”

The online petition launched by a number of Gallagher fans earlier this week has already received almost 400 signatures from people urging Cork City Council to consider naming the new €5 million pedestrian bridge across the North Channel of the Lee after the highly acclaimed guitarist.

In a statement, the group said: “Rory Gallagher grew up in Cork city and he bought his first electric guitar from the iconic Crowley’s music shop on Merchant’s Quay. His legion of fans is growing even to this day as his music is timeless and spans across generations, inspiring young guitarists to play.

“Cork is a vibrant city renowned for its music and due to the significance of MacCurtain Street and that whole area in Rory’s life and musical career, it would be very appropriate to name the new bridge after Rory.”

Cork City Council recently invited members of the public to nominate names for the bridge and among the others to have been suggested is Cork-born Mary Elmes, who was honoured for her work in helping Jewish children escape from the Nazis-occupied France during the second World War.

Among the other names mentioned are those of Cork character, Katty Barry, famous for selling crubeens (pig trotters) and author, Ethel Voynich, daughter of mathematician, George Boole, whose novel about revolution, The Gadfly, sold an estimated 2.5 million copies in the former Soviet Union.

The bridge, which will carry an estimated 11,000 pedestrians and cyclists across the north channel of the River Lee daily, has been designed by ARUP & Wilkinson Eyre Architects and is currently being fabricated off-site by engineering firm, Thompsons of Carlow.

The bridge section will be transported by truck for final assembly in Cork Harbour where it will be placed on a barge and transported up river to the city centre in April 2019. It will then be lifted by crane from the barge into place in one overnight operation.

The barge journey will be timed to coincide with the optimum tide level for clear passage under Brian Boru Bridge and the installation will involve the closure of both Merchant’s Quay and St Patrick’s Quay during the operation.