A Limerick mystery: Two men found with their throats cut in bed

Lost Leads, 1900: When the labourers didn’t show up for work, the farmer went searching 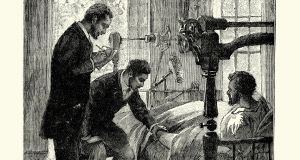 When John Sullivan woke up, he had some questions to answer. Illustration: iStock

The working day had started, but the labourers were late. Michael Clifford and John Sullivan - two Kerrymen in their 20s - had not yet emerged from the outhouse where they slept on the lands of James Nolan at Kilbane, outside Limerick.

The tardiness was unusual. Sullivan and Clifford, from Castleisland, had worked for Mr Nolan for four or five years; they “were said to be boon companions and were known to the police to be sober and industrious,” according to a report in The Irish Times.

The minutes ticked by. As the sun rose at about 5.30am on September 12th, 1900, a servant named Maggie Sullivan was sent to wake the men, who normally slept in the same bed in a loft. Getting no response, she returned to Mr Nolan, who went to investigate himself.

Mr Nolan reached the outhouse, climbed a small flight of six stone steps, and went into the loft. “Both men were undressed in the one bed with their throats cut from ear to ear,” reads a report in The Irish Times. Clifford was “quite dead”, while Sullivan’s wound was less serious; he was merely unconscious.

Dr Holmes of Limerick was sent for, and estimated that Clifford had been dead for some hours. “[Clifford's] wound was fully an inch deep, the main arteries and windpipe being severed. Sullivan’s neck was also cut clear across, but only superficially at the windpipe. Dr Holmes states that the injuries were inflicted with a razor.”

When Sullivan regained consciousness, police arriving to the scene had some questions for him. Sergeant Peter Hogan was the first to enter the outhouse.

“I awoke when I found my throat cut,” Sullivan replied when questioned by the policeman. “I saw a man going out of the door. I did not know the man. It was dark.”

Sullivan figured the man who cut his own throat must have cut Clifford’s. Sergeant Hogan asked Sullivan how he knew his roommate’s throat had been cut. “Sullivan made a motion with his hands, but did not reply.” Hogan noted that Sullivan’s hands were covered in blood, but there was none on Clifford’s.

District Inspector Hetreed arrived a short time later, and immediately went about searching for the razor which the doctor supposed had killed Clifford. Sullivan, for his part, said he hadn’t owned one for a while; he had one previously, but it was “no good”, so he threw it away in the haggard. Clifford owned one, he said. Hetreed found that razor - perfectly clean - exactly where Sullivan said it would be.

Hetreed transcribed his entire Q&A with Sullivan, which was published in full in The Irish Times.

Q: How did you get shaved?

A: I used sometimes get shaved in town

Q: What became of the razor you had some time ago?

A: I done away with it as it was no good

Q: Did Clifford own a razor?

A: It is over there in the bag (pointing to a green carpet bag)

Q: Have you a penknife?

Q: What became of it?

A: I done away with it

A: Because it was no good

A: About three weeks

Q: Had you any enemies that would to this thing to you or Clifford?

A: Not one in the world

Q: Do you know if Clifford had any?

Q: What time did you come home last night?

A: About nine o’clock

Q: Where did you go into town?

A: Into Mark Clohessy’s. Clifford was with me and I had a couple of pints.

The men had been to Limerick city the previous day on Mr Nolan’s milk cart, and had returned and went to bed. Nobody saw or heard anything else until Mr Nolan discovered the men the next morning.

Hetreed arrested Sullivan on suspicion of murder, the circumstantial evidence pointing to his guilt. But he still needed the murder weapon. They searched the loft, but found nothing.

The following day, September 13th, police returned to search the scene. Constable Nealon, one of the officers assigned to the task, was standing on the bed and searching the rafters, when, according to an Irish Times report, he cried out “I have it!” Sitting atop one of the rafters was a razor, covered in blood, and bearing the marks “5MF”, “461” and “90”.

The razor was given to the District Inspector and after a magisterial inquiry, Sullivan was sent forward for trial at the Cork Winter Assizes.

In court, the prosecution’s alleged motive was that some dispute had arisen between the two men, that Sullivan cut Clifford’s throat, and then gave himself a superficial wound to firm up his story about being a victim himself.

Among the evidence heard in court was testimony from a woman named Sarah O’Donoghue, an aunt of Mr Nolan who lived opposite the loft; she had slept soundly, and had not heard anyone entering or exiting the room throughout the night. A constable named William Stanley gave evidence that he heard the men speaking roughly to each other on the night of September 11th as they returned from Limerick. Their voices were raised, but he didn’t hear exactly what they were arguing about, according to one report on the Kerry Sentinel.

As for the mystery razor, a man named George Manning, a private in the British army, said he remembered giving Sullivan a razor. He had given a number of them away, but he could not be exactly sure which one he gave to Sullivan. What Manning did know, is that he himself had received a razor from another private, Michael Moloney, while both were at Kilworth Camp in 1896.

Addressing the court, Michael Moloney had a better recollection the razor which he gave to his comrade, according to another Irish Times report.

“The number of [Moloney's] kit at that time was 461; in common with the other articles of the kit, the razor was stamped with the witness’s kit number, 461. It was also usual to stamp the number of the year on it. The razor (produced) had witness’s kit number on it, and must be the razor he gave Manning. It had 5MF on it - 5th Battalion Royal Munster Fusiliers and also the number 90 - the date on which witness got the kit.”

Despite some compelling evidence, particularly surrounding the alleged murder weapon, Sullivan was spared conviction after a jury failed to agree at the Cork Winter Assizes. And again at the Limerick Spring Assizes, and a third time at the Limerick Summer Assizes.

In the last of his three trials, the jury were locked up overnight. When no agreement was reached, the judge urged the foreman to give the case further consideration: “The foreman said it was useless, but eventually retired, and after a lapse of a quarter of an hour returned unable to agree. His lordship said he regretted the jury could not come to a conclusion, but he would discharge them, and remand the prisoner to next assizes.”

About a month after that, and just over a year after he was discovered in bed beside the dead body of his friend, the Lord Lieutenant of Ireland ordered that Sullivan be released.

A note on his prison records reveals his fate: “Handed over to RIC (by order of his Excellency) 23rd August 1901 & sent to America.”