First runners started at 8.55am and rolling road closures are in place along the route 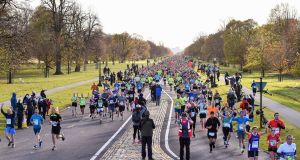 A general view of runners in the Phoenix Park during the 2018 SSE Airtricity Dublin Marathon. Photograph: Sam Barnes/Sportsfile

The 39th Dublin City Marathon got under way in the city Sunday morning with the first runners crossing the starting line at 8.55am and the last of those taking part likely to finish at about 4pm.

It will be a cool start for the runners, with temperatures of four degrees in the morning, but it will remain dry for the entirety of the race, according to Met Éireann.

The route will run from the city centre, through the Phoenix Park, and around to University College Dublin, before finishing back at Merrion Square with rolling road closures along the route.

As many as 20,000 runners will take to the streets for the race which is being sponsored by SSE Airtricity.

The number of women taking part has grown from 70 in 1980 to 7,000 this year and as part of a celebration of female runners Constance Markievicz makes an appearance on the finishers’ medal.

In the wheelchair race, four-time champion Patrick Monahan will have to contend with a strong international field. For many others, this will be their first marathon and the achievement will be in crossing the line. The race also incorporates the European Police Championships.

“We are delighted to again have a sold-out entry of 20,000. The marathon has grown 10-fold from just over 2,000 runners in 1980 to 20,000 today,” said race director Jim Aughney. “I am also proud that we are celebrating female runners today, with a special mention to Mary (Hickey) who has competed in every marathon since we started back in 1980.”

She is the only women to have competed in 38 Dublin Marathons. “I really feel I’m blessed. It’s not everyone that can run a race 39 years in-a-row. Life hits you in so many ways so to get to the start line every year, I’m amazed and surprised by that really and regard myself as very lucky,” she said.

For the elite runners there is a potential prize €120,000 up for grabs.

In the elite women’s field Remalda Kergyte of Lithuania will be one of the key contenders. Ireland’s Lizzie Lee will be looking to make her mark in her second ever Dublin Marathon, she last competed in 2006.

The national title will be a battle between Lee and fellow Olympian Caitriona Jennings. The Donegal woman placed second in the 2017 National Championships.

In the men’s field, last year’s winner Benard Rotich of Kenya is set to toe the line. Fellow countrymen Vincent Tonui, Eric Koech and Joel Kiptoo are all likely to be top-10 finishers.

There are several athletes vying for the national honours. Last year’s national champion O’Hanlon will be joined by Clonliffe clubmates Sergiu Ciobanu and David Flynn.

Rio 2016 Paralympian, Monahan will have a competitive international field to contend with this year. Britain’s Johnboy Smith will be a tough competitor.

The official website contains detailed information of the route and the road closures throughout the day.