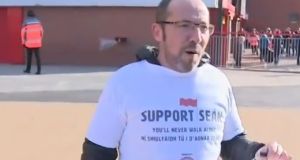 Liverpool fans fundraising for Sean Cox outside Anfield on Saturday. Image via Twitter

Liverpool FC manager Jurgen Klopp has made a €5,000 (£4,400) donation to a Liverpool supporter from Ireland who was critically injured in an attack outside Anfield.

Sean Cox (53) suffered a severe traumatic brain injury when he was assaulted ahead of the Champions League semi-final between Liverpool and Roma on April 24th.

Klopp met Mr Cox over the summer when Liverpool played a pre-season friendly in Dublin.

Everton and Republic of Ireland right back Seamus Coleman has also donated €5,000.

Mr Cox, a father-of-three, from Dunboyne, Co Meath, Ireland, is receiving treatment in the National Rehabilitation Centre in Dun Laoghaire.

His friends have set up a fundraising page to help provide the long-term care and support he is expected to need.

Those collecting outside Anfield on Saturday before Liverpool’s match with Cardiff wore T-shirts with “You’ll never walk alone” in English and Irish.

“His journey will be a long and difficult one and the focus will continue on ensuring the best possible care to maximise the potential in Sean’s recovery.”

“The reality is that the provision of this long term care and support for Sean will necessitate significant funding over many years.”

“As you are aware, our colleague and friend Sean Cox sustained serious and life altering injuries earlier this year while attending a football game in Liverpool.” reads the GoFundMe page.

Jay McKenna, who is the chair of the Liverpool fan group Spirit of Shankly, took to Twitter over the weekend to urge supporters to spare what they could to help Mr Cox.

“The level of solidarity from so many from our community and beyond for Sean, Martina, Jack, Shauna and Emma since this tragic incident has been overwhelming and is deeply appreciated by Sean’s family.

“Over the past number of months Sean has been taking small but important steps on a road to recovery. His journey will be a long and difficult one and the focus will continue on ensuring the best possible care to maximise the potential in Sean’s recovery.

Last week, Roma fan Filippo Lombardi (21) was cleared of being part of a joint attack on Mr Cox.

During the trial at Preston Crown Court, Mr Cox’s brother Martin told the court his brother could not speak or sit up unaided following the attack.

The court heard another man had been arrested in Rome in connection with the attack and was awaiting extradition.