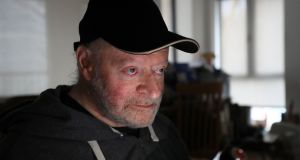 A group of Dublin residents say they will “not back down” until what they describe as a move to evict an elderly neighbour is withdrawn by their landlord, an approved housing body.

Eddie Lyons (81), who lives alone in an apartment in Ffrench Mullen House in Dublin 2, was served with a notice to quit by Tuath Housing in early 2018, months after his tenancy transferred from Dublin City Council.

The grounds for the notice was that he was not keeping his one-bedroom apartment in good order.

The notice was upheld by the Residential Tenancies Board in August 2018 following an adjudication which he attended without representation, and again by the District Court on March 13th, 2020, at which he was also unrepresented.

Execution of the notice was delayed due to Covid-19, but on October 15th he received a letter from Tuath telling him Dublin City Council had confirmed a bed was available for him in a homeless hostel. His rent would be €94 per week with “all meals . . . included in this package”. He currently pays €38.40 per week.

“Please note this offer of alternative accommodation will be held until October 21st, 2020. After this date the offer will not be available,” states the letter. It tells him he “must surrender” his keys by Wednesday and remove his possessions as “any belongings left in the property after this date will be removed”.

A spokeswoman for Tuath said they were not evicting Mr Lyons but had “serious and growing concern over his health, safety and his ability to live independently”.

Mr Lyons, originally from Galway, lived here since 1994 in the old Charlemont Street flats. Following their regeneration, management transferred to Tuath housing and Mr Lyons moved in in November 2017.

Showing the apartment to The Irish Times, he says: “It’s not the tidiest.” The entrance hall, bathroom and kitchen need to be cleaned, but are not filthy. He sleeps on a camp-bed in a cluttered, untidy bedroom and has little other furniture. Many of his belongings remain in the boxes from moving in. Though he has a pre-pay electricity meter, he has not had power for several weeks, saying he will “put money in it”. There is an odour of cat urine, though it is not overpowering.

He has no immediate family, “Just first cousins and my cat, Blackie.”

Asked how he feels about the prospect of losing his home, he says, “I feel bad about it. I am worried. I wouldn’t be able to bring Blackie either.”

The Tuath spokeswoman said it had been trying without success to engage with him on his needs. Mr Lyons had been shown alternative housing at a nearby senior citizens’ complex with “wrap-around supports”, but he had turned it down. “We are hoping [he] will voluntarily transfer to more suitable accommodation for his needs where an element of care and support can be provided.”

Mr Lyons said he had viewed the housing in nearby Ranelagh twice, but it was a bedsit, “just a room and I didn’t like it”. Tuath says a two-bed unit is available.

My Lyons, however, says he wants to stay in his home of 26 years, adding: “There’s no doubt the place where I am could be put in order any way Tuath wants.”

Neighbours Carmel Ward and Gina Nicoletti got to know Mr Lyons since the lockdown. Describing him as “a very quiet man who lives a solitary life”, Ms Ward says: “What he needs is some support, a home-help, with cleaning and cooking.”

They had been unaware of his situation until they began checking on him during the lockdown. “We are determined he won’t be on his own anymore and will support him in whatever way we can,” said Ms Nicoletti. “We demand humane treatment for Eddie and we won’t back down until this eviction order is quashed.”

The Tuath spokeswoman said it was “heartening” to hear Mr Lyons was “engaging with his local community to seek help”. This was an important step forward.