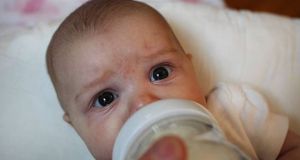 Bottle-fed babies swallow ‘millions of microplastic particles’ – should we be worried?

The headlines are scary but the research by Irish scientists which confirmed this level of exposure was robust, and is regarded as a “milestone” in the understanding of human exposure to tiny plastic particles.

The team based at Trinity College Dublin found the recommended high-temperature process for sterilising plastic bottles and preparing formula milk caused bottles to shed millions of microplastics and trillions of even smaller nanoplastics – it proposed revised guidelines to reduce risk.

Microplastics in the environment are known to contaminate human food and water, and have clear detrimental impacts on oceans and marine species.

While the effects on humans and infants in particular are largely unknown this study shows food preparation in plastic containers – especially where elevated temperatures are involved – can lead to exposure thousands of times higher.

The polypropylene bottles tested make up 82 per cent of the world market (glass bottles are the main alternative).

Polypropylene is one of the most commonly used plastics and preliminary tests by the TCD scientists found kettles and food containers such as lunchboxes also produced millions of microplastics per litre of liquid.

Scientists across the world have underlined there is no confirmation of harm but underline the levels of plastics in the diet warrant urgent investigation.

“These findings represent an important milestone. The scale of microplastic exposure presented here may seem alarming, but the real-world effects on infant health require further investigation,” according Philipp Schwabl of the Medical University of Vienna.

Prof Oliver Jones based at RMIT University in Melbourne noted in The Guardian that the babies’ exposure levels were estimates, not measurements.

“We should not be making parents feel bad for using plastic bottles. However, this study illustrates that the microplastics problem is likely much bigger than we think [AND]something we need to start really getting to grips with,” he added.

Even if the numbers of annual microplastic consumption by infants are overestimated due to the limited data available, “the numbers released by a single correctly prepared feed are alarming”, declared Dr Fay Couceiro, senior research fellow at the University of Portsmouth.

She and others are particularly concerned to see an extremely high load of nanoparticles, “which are known to be capable of crossing cell membranes and entering human tissue”.

It is these smaller sized microplastic particles that have the potential to be retained by the body while the larger particles have so far all been shown to be excreted after ingestion.

Studies on the toxicity of smaller nanoplastics entering the body’s cells are limited, though preliminary data have shown negative impacts.

What should parents do?

As with all health risks a sense of balance is required. Despite concerns, “it is important not to become alarmist and formula feeding is a necessity for many parents who cannot breastfeed for a variety of reasons”, Dr Couceiro added. “The risks from not sterilising bottles or using hot water are well understood and very real, and these known risks of disease must outweigh that of microplastic production until their health risks are understood.”

Prof Oliver Jones of RMIT University in Melbourne agreed: “We certainly should not be making parents feel bad for using plastic bottles”.

Further studies looking at other methods of formula feeding, such as cold sterilisation techniques and usage of pre-prepared formulas, are needed before any chances in guidance can be made, she believed.

But this study is another piece of the puzzle illustrating the microplastics problem is likely much bigger than we think.

“This issue is something we need to start really getting to grips with sooner rather than later,” Prof Jones added.

What should happen now?

The TCD team including Prof John Boland of Amber research centre were “absolutely gobsmacked” at the number of microplastics produced by the baby bottles.

“A study last year by the World Health Organization estimated adults would consume between 300 and 600 microplastics a day – our average values were on the order of a million or millions,” Prof Boland observed. “We have to start doing the health studies to understand the implications. We’re already working with colleagues to look at what buttons in the immune system these particles begin to press.”

Many of the particles would simply be excreted, he believed, but further investigation was needed into how many could be absorbed into the bloodstream and travel to other parts of the body – and ultimately on their fate.

“Crucially, we have found that it is possible to mitigate the risk of ingesting microplastics by changing practices around sterilisation and formula preparation,” he stressed.

In the meantime, his message is to apply the precautionary principle. He has already gotten rid of all those food containers he used to use, and if he had young children he would modify how he prepared milk feeds.