Repairing defects at Sandyford apartments to cost up to €10m 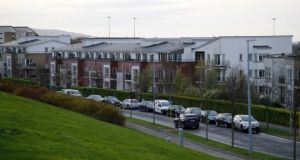 Building defects at a large south Dublin apartment complex could cost up to €10 million to repair, according to an official fire safety audit.

Bills of €11,000-€14,000 per apartment are estimated in the report, which examined 632 units at Simonsridge, Sandyford, which was built in 2006 by developer Shannon Homes.

In March, The Irish Times reported on a preliminary investigation by management company KPM that uncovered a range of potential fire-safety issues.

The management company passed its findings to Dublin Fire Brigade, and residents were asked to volunteer as fire wardens.

A fire-safety audit prepared by Logical Real Estate Consulting was issued to owners in September. It details shortcomings found during two inspections of a sample of 10 apartments and common areas by chartered building surveyor Cathal Maher.

He reported “a significant number of fire-safety deficiencies with workmanship and building materials”.

In an email, the owners’ management company said that although it intends to raise funds to cover any remedial work in the common areas, it is “not in a position to compel people to undertake expensive works to their private property”.

The report details “a number of fire-safety deficiencies” relating to means of escape and internal fire spread.

The report states that “a fire could spread and breach the protected hallways within the apartments in less than 30 minutes”, which is the required length of time under the granted fire certificate.

Pipes passing through the compartment levels of apartments were not fitted with fire-rated collars, and “internal protected hallways do not extend to the underside of the concrete slab above”, according to the report.

Services passing above the front door of the apartment units into the common area hallways were also not appropriately fire-stopped, nor were the ceilings of these hallways.

A lack of fire-stopping material was also noted in the attics and spotlights of top-floor apartments, while the entire attic void “could provide a passage for smoke and fire above the internal hallway [protected corridor] within an individual apartment”.

There were no fire extinguishers found in any of the common areas that were surveyed. However, the emergency lighting, fire doors and smoke detection system in common areas were found to be in good condition in general.

A spokeswoman for Dublin Fire Brigade said it had received a copy of the report and was “working with the management company to ensure compliance of fire safety issues”.

“Dublin Fire Brigade will continue to monitor the situation,” the spokeswoman said.