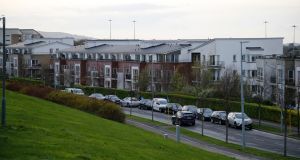 Dublin Fire Brigade has ordered the developer of a 632-unit boom-time apartment development to conduct a full fire-safety review after concerns were raised by an investigation undertaken at the scheme.

Simonsridge in Sandyford, Co Dublin was built in 2006 by developer Shannon Homes.

A preliminary investigation by management company KPM uncovered a range of potential fire safety issues, according to correspondence sent by the manager to residents at the development. The issues are understood to relate to fire safety features in common areas, as well as other structural and fire-stopping elements.

The management company has also passed its findings to Dublin Fire Brigade, which confirmed it has asked Shannon Homes to undertake a full investigation at the scheme. Residents at Simonsridge, a major development which spans several sub-estates, have also been asked to volunteer as fire wardens in order to maintain an increased level of vigilance.

Shannon Homes had not responded to a request for comment prior to publication.

Residents were told about the latest developments in an email from KPM earlier this month. The email, which has been seen by The Irish Times, states that “investigations have been on-going to assess the presence of potential fire safety related issues in Simonsridge”.

A second email sent to residents by the management company shows they are being asked to volunteer as fire safety wardens. “In an effort to minimise risk and to increase awareness of fire safety among residents we are looking for at least one person per building who may be interested in becoming a fire warden for their building”.

A spokesman for KPM said that the company would not comment on individual developments. However, he confirmed that the company recently met with Dublin Fire Brigade and following that meeting “we have taken the advice of DFB and written to residents in a number of developments in the Dublin region with regard to fire safety”.

“In a number of cases, investigations into legislative compliance levels within residential buildings and adherence to original fire cert applications are ongoing. Our number one priority is the life safety of residents.”

KPM has previously told The Irish Times that it identified fire safety issues in “almost all” of the 60 apartment blocks it surveyed after the Grenfell tower disaster. The company has called for reform of how apartment blocks are managed and the provision of a State-backed remediation fund. A recent investigatoin by The Irish Times uncovered legacy issues at four boom-era apartment developments in Dublin, prompting widespread calls for a new system to remedy defects.