Business owner says planned law could close him ‘overnight, like switching off a light’ 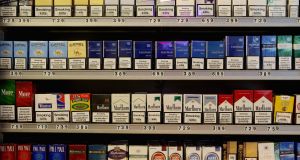 Minister for Health Simon Harris said he did not believe the new initiative would be controversial. Photograph: Oli Scarff/Getty

Ireland’s largest supplier of cigarette vending machines has said it will go to court over proposed legislation banning them from dispensing tobacco products.

Minister for Health Simon Harris said on Monday he would bring draft legislation before Cabinet in the coming weeks that would outlaw machine sales and the sale of vaping products to anyone under 18.

“I do not believe you should be able to buy tobacco from a vending machine,” Mr Harris said, confirming the arrival of legislation. “We know this can make it easier for children and others to buy tobacco.”

He said he did not believe the new initiative would be controversial. “Tobacco kills you. It is very bad for you. It causes cancer. We have a policy called a tobacco- free Ireland, ” he said.

As regards placing an age limit on vaping sales, Mr Harris said he was extremely concerned at the number of children who were starting to use the products and criticised the “unethical and disingenuous ways” in which companies were marketing them, notably with the use of appealing colours and flavours.

Companies involved in the supply and restocking of cigarette vending machines have expressed alarm at the threat posed by the forthcoming laws.

Limerick-based Tobaccoland, which supplies and restocks 2,300 outlets, said it would challenge the legislation in court. Separately, the Irish Cigarette Machine Operators Association said it would consider a legal response once it had seen the proposals.

Tobaccoland owner James Walsh, whose family business has been operating for 30 years, said he had no choice but to mount a legal challenge.

“What can we do? We will challenge it all the way to the Supreme Court, ” he said, adding that he employs 30 people and that the legislation could close it down “overnight, like switching off a light”.

He said Mr Harris “will give us a certain amount of years’ grace [but] we can’t get into anything else. I’m 76 years of age.”

The company invested €1.5 million in upgrading its machines in the past two years and, like others on the supply end, Mr Walsh believes the token system used in bars and hotels is sufficient to limit cigarette sales to those over 18. Under the system, people buying cigarettes must get a special token to use in the machine from a member of staff who can ask for identification.

John O’Brien of the Irish Cigarette Machine Operators Association said it would consider its legal options, adding that his organisation’s 40 members were mainly small businesses.

“We are the only country that has a token system and the vendors were at the forefront of putting that in,” he said. “My own company, we employ 12 people and there is probably a workforce in the country of 160-200 people. Jobs will be affected.”

The association previously estimated there were about 6,000 vending machines in Ireland, although that number is likely to have fallen in recent years, particularly given a decline in the pub trade.

Vincent Jennings, chief executive of the Convenience Stores and Newsagents Association, said it welcomed the introduction of a minimum age on vaping sales, something it had itself lobbied for.

However, he said there was disquiet about the “aggressive pursuit” of a smoke-free policy for Ireland, particularly regarding the lack of consultation with stakeholders.

A licensing system for tobacco sales, which he believes will be included in the legislation, would not be acceptable to the sector if it included a fee, Mr Jennings said.