Sale of tobacco products from vending machines to be banned 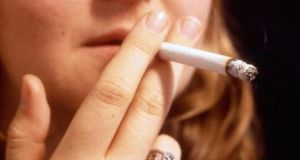 The Government is to ban the sale of tobacco products from vending machines, the Minister for Health Simon Harris has said.

The Government is to ban the sale of tobacco products from vending machines, the Minister for Health Simon Harris has said.

The Minister said the Government also plans to prohibit vaping for those under 18 under new legislation to be brought to Cabinet in the next few weeks.

Speaking on Monday, Mr Harris said he is extremely concerned at the number of children who are starting to vape.

He criticised “unethical and disingenuous ways” in which companies were targeting children in terms of colours and flavours.

Mr Harris said he would bring legislation to Cabinet this month to ban vaping for under 18s as well as outlaw the sake of tobacco in vending machines.

“I do not believe you should be able to buy tobacco from a vending machine. We know this can make it easier for children and others to buy tobacco.”

He said he did not believe the new initiative would be controversial.

“Tobacco kills you. It is very bad for you. It causes cancer. We have a policy called a tobacco- free Ireland. ”