Sealed files on Kincora Boys’ Home ‘must be released’ 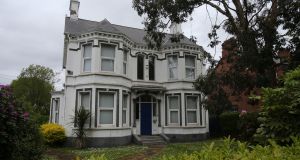 The Kincora Boy’s Home in east Belfast was one of the institutions examined as part of the North’s Historical Institutional Abuse Inquiry. File photograph: Niall Carson/PA

Closed files relating to the Kincora Boys’ Home in east Belfast must be released so allegations of abuse can be investigated, a former MP for the area has said.

“Systematic abuse took place at this house,” said Alliance MEP Naomi Long. “These papers need to be released so that abuse can be investigated properly and in a way which will bring truth and justice to the victims and survivors of Kincora.”

Northern Ireland’s Department of Communities said the files are closed to the public “because they contain sensitive personal data”.

Three former members of staff – Joseph Mains, Raymond Semple and William McGrath – were convicted of sexually abusing 38 boys at the home in the 1980s.

It was one of the institutions examined as part of the North’s Historical Institutional Abuse Inquiry. This reported in 2017 that there was no evidence to support allegations that either security agencies or prominent individuals were complicit in the abuse of children at the home.

On Monday the Belfast Telegraph revealed that a number of closed files relating to Kincora are held in the Public Records Office of Northern Ireland.

One file is scheduled for release in 2026.

The files date from as early as the 1950s, though the majority relate to the early 1980s. Many are listed simply as “Kincora”, though some are described as “transcripts of proceedings of Committee of Inquiry into Children’s Homes and Hostels” and “evidence of witnesses”.

Others, relating to the years 1984-5, are titled “Child Care Policy Directorate. Child Protection”.

“This lack of transparency and repeated refusal to open the files relating to this case fuels the perception there was, at best, more knowledge of what was happening at Kincora Boys’ Home at the time than has been admitted. And at worst government cover-up of or collusion in the abuse itself,” said Ms Long.

Could sensitive data be redacted?

Historian Dr Eamon Phoenix said that files were often closed in order to protect identities of named individuals who might otherwise be subjected to unfair allegations, but that such decisions should be subject to review, or names redacted to permit publication.

In 30 years of examining state papers, he said, he had only seen one file connected to the home, and had “never seen a file in detail on Kincora”. This was in contrast to the documentation on other homes, which was held in open files.

It was “peculiar”, he said, that the files relating to Kincora were not available, and this was “surprising . . . given that Kincora was the subject of very serious allegations for decades”.

In a statement, the Department for Communities, which is responsible for the records office, said that files relating to the Committee of Inquiry into Children’s Homes and Hostels (the Hughes inquiry) are closed to the public “because they contain sensitive personal data”.

A spokeswoman said “it is an extended closure period to protect the names and other personal details of victims and to comply with data protection legislation. Of the further specific files relating to the Hughes inquiry [Kincora], seven have already been released with some blanking out applied.”

She added that these are available for consultation in the records office.