Remote working: ‘I do find myself wondering how I did the commute’ 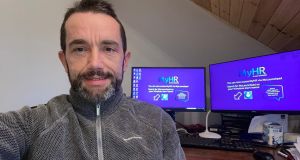 Thomas Brennan working from his home in Kilkenny. ‘I would be 100 per cent happy with a blended working model in the future’

Over the course of six years up to last March, Thomas Brennan spent a total of 287 days travelling to and from work.

Every weekday at 5.10am his alarm would sound and he would set off on a three-hour commute from his north Co Kilkenny home to East Wall in Dublin. Every evening he would retrace his steps, not getting home until after 7pm.

Brennan has been working remotely since the Covid-19 crisis kicked off in March and has, as a result, saved himself at least 25 hours of commuting via car, train and bike every week.

“I do find myself wondering how I did it,” he says after the Government confirmed it was going to legislate to give people the right to seek to work remotely beyond the pandemic.

“I would be 100 per cent happy with a blended working model in the future, which would see me working in the office maybe three or four days every two weeks.”

He says “most people have proved their job had not been impacted when they were working it from home and this is definitely the new normal”.

Brennan’s spare bedroom now serves as an office, where he uses equipment borrowed from his employer, the ESB. All his face-to-face meetings here and in the UK have been replaced by Zoom and Skype calls, which would have been “unimaginable this time last year”.

For almost three years before the pandemic, Brennan was trying to sell his home in order to move closer to the office. “I don’t think I will be doing that now,” he says.

Mary Rose Lyons runs a digital marketing agency in Dublin, but in October decided to relocate to Tenerife and work from there until just before Christmas.

“I picked Tenerife because I really wanted to be sure of sunshine,” she says. “I also considered Greece but the weather there can be hit and miss [at that] time of year.”

She got what she wanted – the average temperature in her new workplace was about 26 degrees. “I am absolutely certain I did better work while I was away and I got into a real good routine.”

From 8am to midday she would “get in a good stint of work” before taking two hours off for lunch and a trip the pool or the beach across the road from her Airbnb, which cost €28 a night.

“I would make my calls in the afternoon between 2pm and 6pm, and most weeks I would take Fridays off so we could explore the island,” she adds, before rattling off the benefits of remote working closer to the equator.

“I was able to unwind more, do better work and to reimagine how I might run my business in the year ahead,” she says. “I would do it again in a heartbeat and there were no downsides to it at all.”