Record 108,364 people stuck on a hospital trolley so far this year 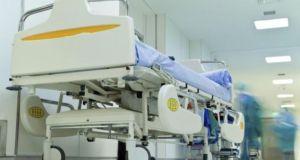 A record number of people have spent time on trolleys in hospital emergency departments or on wards this year waiting for admission to a bed, nurses have said.

The Irish Nurses and Midwives Organisation (INMO) said that up to November 29th, 108,364 people had queued for a hospital bed at some stage.

It said with a month to go in 2019, more people had to wait on trolleys and on wards for admission to a bed than in the whole of last year, which saw a-then-record 108,227 having to queue for beds.

The INMO is seeking the formal intervention of the Health Information and Quality Authority HIQA to deal with hospital overcrowding.

The INMO said the hospitals worst affected by overcrowding this year so far were:

* University Hospital Limerick: 12,810 had to wait for a bed

INMO general secretary, Phil Ní Sheaghdha, noting winter had only just begun, said: “these statistics are the hallmark of a wildly bureaucratic health service, which is failing staff and patients alike. We take no pleasure in having to record these figures for a decade and a half.

“We know the problem, but we also know the solutions: extra beds in hospitals, safe staffing levels, and more step-down and community care outside of the hospital.”

She said that five years ago, hospitals like Beaumont consistently faced the most extreme overcrowding problems in the country.

However, she said they had reduced that problem by adding beds and growing community care. She said other services “could do the same and must be allowed to do so”.

“No other developed country faces anything close to this trolley problem. It can be solved, but a strong political agenda to drive change is needed.”

“The INMO has written to the health and safety authorities this week to try force a change from the employers. Hospitals should be a place of safety and care - not danger,” Ms Ní Sheaghdha said.

The INMO said on Friday there were 522 patients deemed to require admission waiting on trolleys in emergency departments or on wards for a hospital bed.

Emergency medicine consultant Fergal Hickey described escalating trolley numbers as a failure in planning by the HSE and the Department of Health.

Dr Hickey, who is communications officer for the Irish Association of Emergency Medicine, warned trolley numbers could reach 1,000 patients one day soon. Earlier this month trolley numbers reached a record high of 679.

“This is not the way this should be. Unfortunately it has become typical. This is a failure of planning by the HSE and the Department of Health to provide adequate beds for the population.”

Dr Hickey also warned that based on the Australian flu season just passed, which was the worse since 1980, Ireland could be facing numerous flu deaths this winter.

“This is really worrying. This has been a problem, we keep setting new records for crowding, records that we don’t want.” Unfortunately increased trolley numbers are now the norm, he added.

Dr Hickey said it was a myth that patients who should have gone to see their GP are blocking up emergency departments. People on trolleys are people who have been seen and need to be admitted and need a hospital bed, he said.

He described the HSE’s ‘winter plan’ as “a complete joke”. The HSE is missing the point that there are not enough acute beds, he said.