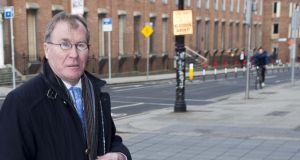 It may not be exactly the same scenario as 40 years ago when two byelections in Cork city and county delivered an ultimately fatal blow to Jack Lynch’s tenure as taoiseach but next week’s byelection in Cork North Central will be watched closely by both Leo Varadkar and Micheál Martin.

Back in November 1979, it was the victory of former Fine Gael TD Liam Burke in Lynch’s home constituency of Cork city which particularly harmed the then taoiseach’s standing.

While Fine Gael will be hoping to repeat that feat with Senator Colm Burke (no relation to his late namesake), it is arguably the Fianna Fáil leader who is under more pressure on Leeside given the seat that’s up for grabs is one vacated by party stalwart Billy Kelleher upon his election as an MEP.

Notwithstanding the pressure on Martin, most commentators agree that turnout is likely to be low – first because whatever the result, it won’t change the Dáil arithmetic, and second, whatever happens in the byelection will be quickly superseded by a general election in the first six months of 2020.

It is as much with a view to the forthcoming general election then that all the main parties are contesting the byelection, with Fianna Fáil pinning their hopes on county councillor Pádraig O’Sullivan from Glanmire to hold its seat in the face of a stiff challenge from Burke, a former city councillor and MEP.

The constituency itself is a diverse mix with many voters who previously were living in county council territory now finding themselves in the city following a boundary extension which saw satellites towns and villages such as Glanmire, Blarney and Tower all incorporated into the city.

That move has resulted in the balance, at least nominally, shifting back towards a more urban constituency with approximately 76 per cent of the 141 voting boxes coming within the city area and 24 per cent from the county. But that figure masks the fact many polling stations within the city boundary are still resolutely rural.

Aside from general issues concerning the health service, housing and anti-social behaviour, the main local issues are infrastructural and the need for definite progress to be made in relation to the long-awaited Northern Ring Road, the M20 Cork-Limerick motorway and a new hospital for the northside.

O’Sullivan, who ran as Independent under the New Vision banner in 2011 when he polled just 1,020 votes, or 1.96 per cent, is well-known around his home base of Glanmire and should do well there and in other rural areas. But he has a greater challenge in urban, working-class areas.

Burke, who is from Dripsey in the county, should enjoy greater name recognition from his time as an MEP and his time as city councillor from 1999 to 2007 but he was never a poll-topping performer, averaging just over 13 per cent of the vote in his two municipal contests in 1999 and 2004.

He may also benefit from a certain sympathy vote in that he was defeated at the 2016 convention by then sitting but now retiring party TD Dara Murphy and the party HQ opted to add newcomer Julie O’Leary rather than Burke to the ticket.

Of the other candidates, Cllr Thomas Gould of Sinn Féin looks best-placed. A vociferous campaigner on housing, he accuses both Fine Gael and Fianna Fáil of neglecting the northside but he will have to reverse a decline in the party’s support in this year’s local elections if he is to have any chance.

The Greens were the success story in the locals in Cork city last May and newly elected Cllr Oliver Moran is their standard-bearer but it remains to be seen if he can win votes in the large working-class areas of the northside or among farmers who are not enamoured of the Greens’ message on the need to reduce cattle numbers.

Moran may have his eye more on the next general election and so too will newly elected Labour Cllr John Maher who polled well in the locals to win his party’s sole seat on Cork City Council after the 2014 wipe-out.

Solidarity’s Cllr Fiona Ryan, who was co-opted on to Cork City Council to replace party colleague Mick Barry when he was elected to the Dáil in 2016, had to battle hard to hold her seat. Barry will be watching closely her performance particularly in rural areas as an augury of the challenge he faces next time out.

Other candidates include James Coughlan of the Workers Party, Sinead Halpin of the Social Democrats and Finian Toomey of Aontú, as well as Independents Martin Condon, Charlie Keddy and Thomas Kiely. Gould, Maher, Moran and Ryan will all be hoping to pick up transfers from them to keep them in the race.

Theoretically, it is possible one from this group of broad left candidates could bridge the gap to Burke and O’Sullivan with a good run of transfers but it should really come down to a contest between Fianna Fáil, which polled 27.9 per cent here in the 2016 general election, and Fine Gael, which polled 17.8 per cent.

The vote will take place on November 29th, the same date as byelections in three other constituencies – Dublin Fingal, Dublin Mid-West and Wexford.