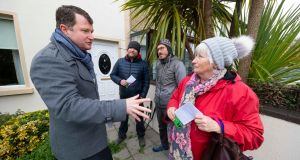 It’s early afternoon on a bitterly cold Friday, and Minister of State for Defence Paul Kehoe is striding door to door in his hometown of Bree, Co Wexford.

He has brought Fine Gael’s byelection candidate, Verona Murphy, here to canvass, and with only two weeks left before polling day, they dart feverishly from estate to estate in Murphy’s branded minivan.

Her answer that Islamic State, also known as Isis, is “a big part of the migrant population” in Ireland and services are needed to “alleviate that type of indoctrination”, has caused controversy both within her party and outside it, with opposition parties calling for Taoiseach Leo Varadkar to dissociate himself from the remarks.

At almost every door, she is recognised either by her voice or face, which is probably a testament to the work she has done in national media in her role as president of the Irish Road Haulage Association.

Women in particular seem to react well to her.

“For too long the men have been in control. It’s important for a woman to have a strong voice, and not be cowed down,” says one woman.

Around 30km away her fiercest competition in the race is also on the canvass trail.

While Murphy has a clear celebrity factor working in her favour, Fianna Fáil’s Malcolm Byrne has been a councillor since 2009, and put in an impressive performance in the most recent EU elections, nabbing 69,000 first-preference votes. “I’m in touch with the issues on the ground,” he says.

When it comes to his Fine Gael competition, he doesn’t pull any punches.

“We have more than 3,000 people on the housing list. We have homelessness. Verona Murphy and I were on the Tonight Show, and she caused controversy when she said that we don’t have homelessness in Wexford, and to me it is a sign that she is completely out of touch. Wexford County Council will probably spend again this year around half a million euro on emergency accommodation.”

Asked later if she believes housing is an issue in Wexford, Murphy replies: “Believe it or not, Wexford is in the top three county councils for dealing with housing issues. We currently have no people in emergency accommodation, thank God.”

Efforts to drill down into the topic further are hard because Murphy is pelting from voter to voter, but she acknowledges that housing is, in fact, one of the main issues that comes up in between mental health and the status of Rosslare Europort.

As if to reinforce his point, Byrne is tackled on housing while canvassing, sometimes forcefully, although the target of the ire is the Government.

“The homelessness crisis is ridiculous. It is cruelty. What has gone wrong? There are 19 homeless people living in tents from Wexford to Rosslare. There are three men living in woods. It sickens my stomach thinking of people in the freezing cold,” says Mary Morrissey when he knocks on her door in Camolin.

Byrne is brought into the living room of one elderly couple, who tell him Fianna Fáil needs to replace Micheál Martin as leader, and who also ask him where exactly the money they pay on property tax goes.

An issue for all of the candidates is that a lot of people simply are not aware there is an election coming up.

And while a lot of commentary has focused on it being a two-horse race in Wexford between Byrne and Murphy, there are other candidates who are also hoping to impress on Friday week: Labour stalwart Cllr George Lawlor is a candidate and the Greens have chosen environmental activist Karin Dubsky. Johnny Mythen is the Sinn Féin candidate.