Life expectancy for children born in NI 1.6 years shorter than in South 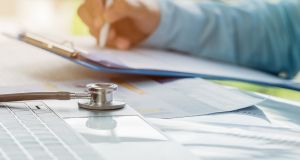 In the North, 94,000 people are waiting for more than a year for a consultant compared to just 3,364 in England though England has 30 times the population of Northern Ireland. Photograph: iStock

A united Ireland is “unlikely to ruin the State” and could cost less than people assume, an economist at the Economic and Social Research Institute (ESRI) has said.

Dr Seamus McGuinness confirmed that the British subvention to Northern Ireland is £9.2 billion a year (€10 billion), but that would not necessarily be the cost to the Republic’s taxpayers in the event of a united Ireland.

Dr McGuinness told the Ireland’s Future meeting tonight that when the “non-identifiable expenditures” are stripped out such as the North’s contribution to the UK debt, defence budget and pension liabilities, the figures falls to between €4.9 billion and €8.6 billion per annum depending on how negotiations go with the British Government.

He acknowledged this was a lot of money but had to be seen in the context of a rise in spending by the Irish State between 2017 and 2018 from €77.4 billion to €82 billion – an increase of €4.6 billion “which is roughly the lower estimate of the subvention and that was achieved without even running a Government deficit”.

Dr McGuinness outlined the poor economic performance of the North in recent years and the chronic low productivity.

The North is the region with the highest proportion of people with low education qualifications in the UK. Some 35 per cent of children leave school with the lowest level of educational attainment in comparison with 11 per cent in the South.

GDP in the Republic is 50 per cent higher and even when multinationals are taken out of the equation, the average household in the Republic has net disposable income of $3,000 (€2,700) higher than households in the North, he stated.

Dr McGuinness told the meeting that life expectancy for children born in Northern Ireland in 2017 is 1.6 years lower than in the Republic.

He said the North’s NHS was consistently the worst performer of the four “nations” of the UK.

He said 21 per cent of people in the North are waiting for an elective care procedure compared to 8 per cent in England.

In the North, 94,000 people are waiting for more than a year for a consultant compared to just 3,364 in England though England has 30 times the population of Northern Ireland.

“Both health services have their problems, but you can no longer hold the NHS in the North as the gold standard or something that will be a huge loss,” he said.

“There is very little point of having health care free at the point of access if you can’t access it.”

Approximately 150 people turned up at the meeting at the Croke Park suite. Ireland’s Future published a letter in The Irish Times earlier this month signed by more than 1,000 people from Ireland and the United States, calling for a Citizens’ Assembly in advance of a border poll.

Senator Frances Black said the prospect of a united Ireland is “not a radical proposal. This is something that we need to be able to talk about openly, honestly and without fear. It’s not a taboo subject anymore and includes everybody on this island. It is not something that should be party political”.

She said Irish people had a tendency to “simply stick our head in the sands” over issues such as abortion, but the referendum on the Eighth Amendment showed what could be done when difficult issues were confronted.

Former Victims’ Commissioner Patricia MacBride said a Citizens’ Assembly is a way of engaging all levels of society without political parties being involved.

“You start with the vision and then you plan the journey. Where do you want to be in terms of your health service, your education service and social care. What are the things we want to see in the country we call home?” she said.

“It’s an opportunity for participatory democracy and for people to ask, ‘what kind of a society do we want?’ We cannot say what the endgame will be. We don’t know what the best model of governance in a new Ireland would be.”

Campaigner Ailbhe Smyth said the lessons from the abortion referendum were that campaigners should confront the fears that people have. She said engaging with people showed that the “sky wouldn’t fall in” and contributed to the vote that repealed the Eighth Amendment.

Queens University Belfast Professor of Law Colin Harvey proposed a date of May 22nd, 2023 as the date for a border poll in both the North and the Republic. That date would be 25 years on from the referendum ratifying the Good Friday Agreement.

He said putting a timeframe on the proposal would concentrate minds. He suggested that it cannot be just up to the Secretary of State for Northern Ireland to decide on when to call a border poll and the Irish Government must also be involved.

“We are the sensible and the responsible people in the room who are planning for change,” he said.