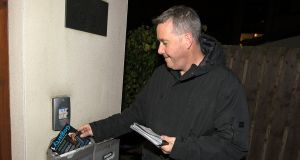 Paul Gogarty may be the first of a kind in Irish politics: a Green pool Independent.

Famous nationally for shouting “f**k you” at Labour’s Emmet Stagg in the Dáil, Gogarty is tipped by local figures to be one of the frontrunners, along with Fine Gael’s Emer Higgins, to fill the Dublin Mid West Dáil seat vacated by Frances Fitzgerald after her election to the European Parliament.

He is hoping that next week’s byelection – one of four being held on November 29th – will see him retake the Dáil seat he held for the Green Party between 2007 and 2011, before going his own way as an Independent.

Fianna Fáil and Fine Gael gene pool Independents often closely orbit their old homes, and while Gogarty does not rule out a return to the Greens, his relationship with party leader Eamon Ryan is understood to be cool.

Gogarty straddles two of the strongest political brands of recent years. A member of South Dublin County Council, his literature describes him as a “strong Independent who works with others” who has the “best green record of any candidate” in the byelection.

Voters aged over 30, he believes, will remember his time with the Greens, while younger, climate conscious voters are more likely to opt for the Green Party brand. “They wouldn’t really care whether it was a monkey or a dolphin running for the Green Party as long as they are decent people,” he says.

He is on his own for a focussed Wednesday evening canvass around Adamstown, the town founded in the mid-2000s. Adamstown has a train station, schools and a community centre, but only a scant few shops. Its development was stunted by the crash, and residents repeatedly raise the lack of facilities.

“It is a bit unsocial around the place,” says Gerry Moore. “The kids have nothing to do.”

Concerns around crime and anti-social behaviour are raised across the constituency, says Gogarty, adding that few raise the issue of immigration.

“Yes, we need to have a more robust policy in terms of work permits and visas for the economic migrant side of things, but we have to uphold our obligations under the UN convention. Studies have shown time and time again that immigrants make a net contribution to society.”

Gogarty’s pitch is that the winner of the byelection only has a short time to make an impact before next year’s general election, and that it is better to elect someone like him who knows how the Dáil works.

Higgins, in contrast, believes Dublin Mid West voters have “a little bit of an appetite for somebody new”. She is seen as her party’s best hope of winning one of the four byelections, and received a warm reception at the Retired Active Men’s Social in Newcastle, Co Dublin, on Thursday.

“Unless Fine Gael retain this seat out here we are not going to have a Government voice,” says Higgins.

She agrees that infrastructure and transport are among the main concerns for voters, and says there is concern about the impact the planned new town of Clonburris, which will have a population of about 21,000 people in 8,400 homes, will have on existing services.

“Unless we build infrastructure hand-in-hand with housing it is not going to work,” says Higgins.

Canvassing in his native north Clondalkin, Sinn Féin councillor Mark Ward hopes Clonburris will help ease the housing crisis. He says homes with parents, children and grandchildren under one roof are common in estates such as Oakfield and Wheatfield.

“Are you eating cream cakes again?” Ward jokingly asks Brian Cooney, as the 73-year-old answers his door in Oatfield with white spatters on his face.

“No, I’m painting,” replies Cooney, laughing, before the pair discuss the difficulties faced by pensioners and those in social houses.

“I don’t pay a mortgage, I own the house,” says Cooney, before adding: “To get anything, a door or anything, I have to get a lend from the Credit Union. I smoke, I can afford, maybe, if I’m lucky, two packets a week. I don’t drink. I’ve worked all my life.”

Ward repeatedly encourages voters to turn out and vote, with low turnouts in all four byelections widely expected. Sinn Féin sources are hoping that Ward can put in a strong showing to help the party recover from its poor local election performance earlier this year.

“I actually have. I can tell you one thing,” replies Daly. “I won’t be voting Fianna Fáil or Fine Gael. They have devastated this country in the last...for as long as I can remember.”

Ward says Sinn Féin has a “really, really good chance of winning this, but we just need people in this area to come out”.