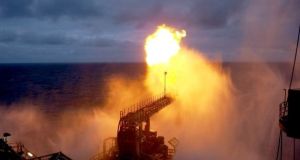 A 40m gas flare from the Ocean Guardian drilling rig during a well production test at the Corrib field in 2014.

The national gas emergency plan was initiated late last week when non-odourised gas was released from the Corrib gas refinery in north Mayo.

That plan remains in place and GNI says it is co-operating with the Commission for Energy Regulation as it conducts an investigation into the incident.

The energy regulator’s investigation is one of several – the Environmental Protection Agency (EPA) and Shell E&P Ireland, operator of the Ballinaboy refinery, are also conducting inquiries.

The EPA has said that any enforcement action will depend on the outcome of its inspectors’ report.

Minister for Rural and Community Development Michael Ring has said the CER investigation should be completed “immediately”.

“People in Mayo and Galway deserve an explanation of how this was allowed to happen and of the actions to be taken to ensure it cannot happen again,” Mr Ring said.

The minister, who originally supported refining the gas offshore, said that the findings of the CER investigation should be “communicated as a matter of priority” to the public, and measures taken to ensure it does not recur.

Mr Ring and Minister for Energy Denis Naughten received updates from the Gas Emergency Response Team (GERT), which was formed as part of the national emergency plan, over the weekend. It is due to meet again on Monday.

The non-odourised gas detected in the national gas system had to be pushed back and burned off at the Ballinaboy refinery from early Thursday morning, using a system known as “flaring”.

Flaring is activated if there is a pressure rise in the plant, or a fire or gas release, and is permitted“for safety reasons or for non-routine operational conditions” under the Corrib gas project’s integrated pollution prevention and control (IPPC) license, awarded by the EPA.

At the EPA oral hearing into its original IPPC licence, Corrib’s deputy operations manager said “a small amount of gas will be flared during a start-up until the export gas composition meets the required Bord Gais specification” and volumes would be “kept as low as possible to minimise environmental impact”.

Shell was prosecuted by the EPA for an intense flaring incident shortly on new year’s eve, 2015, two days after final operating consent for the project was issued by then energy minister Alex White.