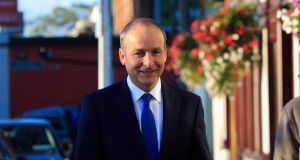 Fianna Fáil leader Micheál Martin’s strategy is to assemble a minority administration with a patchwork quilt of Labour, the Social Democrats, the Greens and others. Photograph: Gareth Chaney/Collins

The next general election, whenever it happens, will for the first time in a decade once more be a stand-up fight between Fine Gael and Fianna Fáil to lead the next government.

Ten years ago, Bertie Ahern and Enda Kenny went head to head in a battle for victory. Four years later, Labour and Fine Gael picked over the carcass of a destroyed Fianna Fáil.

Last year, Fine Gael entered into the campaign believing that it would be returned to office on its conditions, only to see its bid implode. Few believed Fianna Fáil would do as well as it did.

Next time, however, everyone knows that victory or defeat will be decided by the results of a handful of battleground constituencies.

The parties’ ambitions are similar: beat the other with a seat result between 55 and 60, and be in a pole position to form the next government, minority or otherwise.

Micheál Martin’s strategy is to assemble a minority administration with a patchwork quilt of Labour, the Social Democrats, the Greens and others.

If he fails, he returns to Opposition and signs another confidence-and-supply deal with Fine Gael, takes Sinn Féin on as a junior coalition partner or enters government with Leo Varadkar. None is an attractive option.

Fine Gael sources say Varadkar’s ambitions may even stretch towards 65 seats but, should he lose, his attempt to define Fine Gael as the party of the middle classes will have failed.

There is also the theoretical prospect of both parties performing so well they would not need the support of anyone else to form a minority coalition.

The next Dáil will have 160 seats, which will fall to 159 voting TDs with the election of a ceann comhairle. If, for example, Fianna Fáil returned with 58 seats and Fine Gael 55, Martin could form a minority government on his own if Fine Gael supported him in a confidence-and-supply deal.

The more likely scenario, however, is that both will seek to build post-election alliances to get them as near a pure majority of 80 seats as possible.

Victory will depend on the finest margins, and there is the added spice of the competition between the two parties to pick up seats from vulnerable Independents.

Fianna Fáil currently has 45 seats, Fine Gael 50. Here, according to senior figures in both parties, is where the next election will be won and lost:

Fianna Fáil knows it must pick up seats in the capital if Micheál Martin is to become taoiseach. Its partial recovery in the capital in 2016 saw it take seats in six of the 11 Dublin constituencies.

It needs another five and, on a good day, six Dublin TDs. Dublin Rathdown, a three seater, is a write-off but Dublin North-West is a must-win, as is Dublin South Central, where Catherine Ardagh came close in 2016.

Dún Laoghaire should also see a Fianna Fáil gain, as should Dublin Central, where likely candidate Mary Fitzpatrick could eventually make it to the Dáil thanks to the constituency increasing from a three- to a four-seater. On a good day, and with good vote management, Lorraine Clifford-Lee could take a second seat in Dublin Fingal.

Fine Gael’s “Let’s Keep the Recovery Going” pitch found an audience in Dublin at the last election and the party is eyeing gains in Dublin Mid-West, where Tánaiste Frances Fitzgerald will be expected to bring in a running mate, as well as a second seat in Dublin South-West. Independent Minister for Children Katherine Zappone is top of the party’s hit list here, where Fine Gael felt it left a second seat behind in 2016.

Fianna Fáil almost took three out of five in Carlow-Kilkenny at the last election, with Jennifer Murnane O’Connor losing the last seat to Fine Gael’s Pat Deering. Both are from Carlow, which has had voters reallocated to it from Wicklow. Both Carlow candidates will be close again. Fianna Fáil will also aim for a second seat in Wexford. Labour’s Brendan Howlin is seen as impregnable, so a Fianna Fáil gain would have to be at the expense of Independent Mick Wallace or Fine Gael’s Michael D’Arcy or Paul Kehoe.

Both Fianna Fáil and Fine Gael want a seat in the Longford end of Longford-Westmeath, a battle which is set to be one of the dogfights of the next election.

And the last election saw Fianna Fáil jump from zero to two seats in Kildare North, with Fine Gael dropping from two to one. Varadkar will want two seats back, and cause a loss to Fianna Fáil.

Five-seat Galway West is viewed by Fianna Fáil as a possible gain, with a councillor such as Mary Hoade, Peter Keane or Martina Kinane joining Éamon Ó Cuív on the ticket. Party sources expect to peel votes from Independents in this constituency.

Cavan-Monaghan increases from four seats to five and Fine Gael will want Minister for Culture Heather Humphreys to bring in a running mate.

A seat in five-seat Tipperary, where Fine Gael currently has none, is an absolute must for Varadkar, and party sources suggest a second seat is possible, although it would be a challenge.

For Fine Gael figures, however, the strip across north county Cork is where they feel gains must be made: from Fianna Fáil in three-seat Cork North-West, from an Independent in three-seat Cork South-West, as well as another in Cork East.

The retirement of Michael Noonan as a TD for Limerick City poses a challenge, but one that should be overcome in a four-seat constituency.

Munster will ask pressing questions of the big beasts of Fianna Fáil: those TDs who know they must bring in a running mate to realise their ambitions of a Cabinet post.

TD Niall Collins will be under pressure to replace one of Fine Gael’s Tom Neville or Patrick O’Donovan in the Dáil with his running mate. Willie O’Dea in Limerick City will have to be generous with his huge personal vote, and Timmy Dooley will have to bring in another Fianna Fáiler in four-seat Clare.

Billy Kelleher, sitting on 14,000 first-preference votes will also be under pressure to deliver, even though his four-seat Cork North-Central has a stronger left-wing vote than elsewhere in Munster.

Martin will expect his senior TDs to step up to the mark. The party leader shares his constituency with finance spokesman Michael McGrath and the only other senior TD to have a running mate returned to the Dáil at the least election was Mayo’s Dara Calleary.

His frontbenchers must deliver.