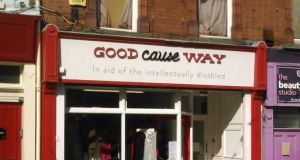 Seven shops have stopped marketing themselves as charity outlets after it was discovered they were not registered, a report from the Charities Regulator reveals.

The report also revealed that one charity shop owner had been prosecuted and three had ceased trading.

The report said the Second Chance Boutique, Co Mayo, the Charity Boutique, Kildare and the Carrick-on-Suir River Rescue, Tipperary, had closed following the receipt of letters from the regulator.

The Twist Charity Shop, in Sligo, closed down following the successful prosecution of the owner.

Charities Regulator chief executive John Farrelly said all charity shops must operate as part of a registered charity and all proceeds must go towards the charity’s charitable purpose.

“If the public see a shop that they think, or any reasonable person would think, is a charity shop, but is not part of a registered charity, they should let us know and we will step in,’’ he added.

Mr Farrelly urged the public to check the charities register to ensure that the proceeds from charity shops were supporting registered Irish charities.

Fianna Fáil spokesman on social protection Willie O’Dea has welcomed the report. “While, in my experience, the problem is not widespread, it is good to see the sector regulated,’’ said Mr O’Dea.