Varadkar to quiz Theresa May on Border commitments 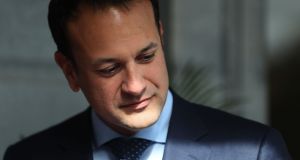 Leo Varadkar will repeat the Government’s concern that a “clear and satisfactory” solution on the post-Brexit Border has not yet been presented. Photograph: Brian Lawless/PA Wire

Taoiseach Leo Varadkar will ask British prime minister Theresa May about her commitment to avoiding the return of physical infrastructure to the Border when the two leaders meet in London on Monday.

Mr Varadkar will repeat the Government’s concern that a “clear and satisfactory” solution on the post-Brexit Border has not yet been presented.

In her speech in Florence on Friday, Ms May offered no specific suggestion about how a hard Border could be avoided if the United Kingdom leaves the EU customs union and Mr Varadkar called for more clarity.

“There’ll be a bit of probing on that,” a senior Government source said in advance of Mr Varadkar’s lunchtime meeting.

On his second visit to Downing Street since becoming Taoiseach, Mr Varadkar will emphasise that Ireland will continue to negotiate as part of the remaining EU 27 member states, represented by the EU’s chief negotiator Michel Barnier.

The two leaders will also discuss the continuing political stalemate in Northern Ireland, which has been without a functioning Executive since January.

“They will consider options to encourage the parties to redouble their efforts to reach agreement and the role of the two Governments in this process,” a Government spokesman said.

The two leaders will consider whether or not there is anything their respective administrations can do to move the process forward, but are unlikely to discuss the prospect of a joint visit to Belfast at this stage.

Mr Varadkar will reiterate the Government’s position that it will not accept direct rule from London in the event of talks in Northern Ireland not reaching a successful conclusion. “It will have to be something different,” a source said.

Minister for Foreign Affairs Simon Coveney is expected in Belfast on Wednesday.

On Sunday, Sinn Féin president Gerry Adams accused the DUP and Fianna Fáil of falsely claiming his party was not committed to restoring devolved government in Northern Ireland.

Speaking at a commemoration in the Ballymurphy area of west Belfast to mark the centenary of the death of hunger striker Tómas Ashe, Mr Adams said Sinn Féin was “fully committed to the powersharing institutions and we are working to restore them”.

Mr Adams reiterated the Sinn Féin position that the political institutions “can only work if they are based on equality, respect and integrity”.

“Our opponents, including elements in the DUP, the Fianna Fáil leadership and others claim Sinn Féin is no longer interested in the Assembly,” he said.

However, he added, “Gerry Adams’ change of tone is a step forward.” Mr Hamilton said while language and culture were important, so too were decisions on health, education and infrastructure.

“We will be engaging with Sinn Féin this week. We want to see government restored. We want to see culture and language matters fairly addressed. We will not accept cultural supremacy for one section of our community. There is enough space in Northern Ireland for mutual respect and a shared future.”

Bilateral talks between the five main parties, rather than multiparty talks with the British and Irish governments, which the SDLP and others have called for, will resume again at Stormont on Monday.