Putting our frontline workers up in lights for Christmas

Dublin’s ‘Winter Lights’ display brightens up the capital for Christmas 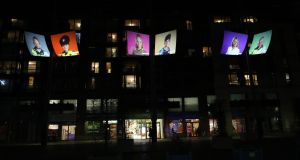 Frontline workers are being honoured in this presentation at Smithfield. Photograph: Nick Bradshaw/The Irish Times

It is starting to feel a lot more like Christmas in Dublin as the City Council’s Winter Lights campaign has transformed 17 locations with colourful projections and lighting displays.

Four new locations have been added to the list for this the third year of the campaign. They are the Mater Hospital, Capital Dock, the Jeanie Johnston ship, and the CHQ triumphal arch.

Dublin Lord Mayor Hazel Chu said the lights were “heartening” coming just at a time when people needed cheering up and she encouraged Dubliners to travel into town to see them.

“They will be up for the whole month of December so, Covid restrictions allowing, I would encourage people to come into the city centre at their leisure and take a look. While you’re in the city, do what you can to support local businesses too.”

Simon Clarke from Dublin City Council’s events section said, “Smithfield [is also] getting an enhanced display this year featuring photos of frontline workers to thank them for their contribution in helping to keep the city running throughout the pandemic.”

The eco-friendly Winter Lights feature 157,800 low-power LEDs, 100 tonnes of equipment and 15,780 metres of cable. The lights that power some of the projections consume less than 80 per cent of the energy of their traditional predecessors. The ship sculpture at Sir John Rogerson’s Quay is all LED, using less electrical power than a domestic socket. City Hall is also illuminated by LED using a total of 3kW, the equivalent of about two dishwashers. The Hugh Lane Gallery and the Mansion House are illuminated each using the power equivalent of a vacuum cleaner. The city council said the cost for the illuminations would not be available until January.