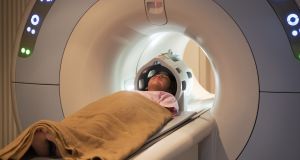 Children not considered in urgent need of an MRI under general anaesthesia at Crumlin Hospital can wait up to 7 years. Photograph: iStock

The waiting list for a child to receive an MRI scan under a general anaesethetic at the children’s hospital in Crumlin is now so long that it effectively means there is no service available, the Minister for Health Stephen Donnelly has said.

He told the Oireachtas select committee on health on Wednesday that the waiting time for child needing an urgent MRI under general anaesethesia at Crumlin was now four years, while a child considered to be a non-urgent case had to wait for seven years.

He said no one could defend the current situation.

The Minister said Crumlin needed another MRI machine as well as the associated staff.

He said he was working to put in place temporary measures to deal with this situation as quickly as possible to make sure that paediatric MRI scans under general anaesethetic could be carried out.

Mr Donnelly also told the committee that he was “well disposed” towards waiving the €100 annual registration fee for nurses which they had to be pay to their regulatory body, the NMBI, this year. He said it would cost about €3 million and the move would require a Government decision. However he said he would be very open to considering the issue and would look at it very carefully.

“Nurses in this country have done an extraordinary job, this year more than ever. I would be very well disposed to try and do something to recognise that. I cannot give a commitment as it would require additional spending and would require a Government decision but I would look at it very closely.”

Mr Donnelly said sorting out pay equality for hospital consultants appointed after autumn 2012 was a very high priority for him and he had every intention of asking Government to resolve this issue urgently.

However said it was “an all-of-Government decision”, as there were other groups in the public service also affected by this issue.

“If it was up to me I would have unilaterally reversed [the pay cuts for recent -entrants consultants] last July. I would have done it in the first week I was appointed. I looked into it straight away. It is an all-of-Government decision as there are wider pay considerations with upcoming pay talks it was not possible to do it.”

The Minister said there was an ongoing perception that Ireland spent more than other countries on healthcare. However he said a recent had shown that “when measured per capita, Ireland’s total expenditure on healthcare ranks 9th among the EU 15 countries and drops to 10th when you consider solely the public aspect of healthcare expenditure”.