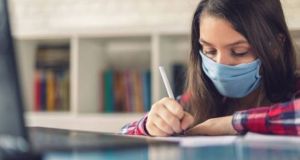 Following an outcry over predicted-grade results in the UK, Minister for Education Norma Foley announced on September 1st that the Government had dropped the use of school-by-school historical data. File photograph: Getty

The use of data on schools’ past Leaving Cert performance would have allowed for “good calculations” to be made for students’ calculated grades, according to internal briefing papers prepared for the Minister for Education.

The documents were prepared last June for Norma Foley prior to the Government’s decision on September 1st to remove school-by-school historical records on Leaving Cert achievement in determining students’ calculated grades.

This decision sparked controversy over whether students from schools with a strong academic track record were unfairly penalised. It has also triggered a wave of legal actions against the Department of Education.

The briefing papers state that a combination of teachers’ estimated grades and historical examination data would ensure standards are “properly aligned across schools”.

“Each school’s expected distributions will be arrived at from the statistical analysis of all the historic Department data sets. These data sets allow for the production of good calculations of the distribution of marks to be expected for each school and nationally,” it states.

It added that the use of this information would ensure “all candidates across the country are treated fairly” and it would not “impose any predetermined score” on an individual or class.

However, following an outcry over predicted-grade results in the UK, Ms Foley announced on September 1st that the Government had dropped the use of school-by-school historical data.

Ms Foley said at the time she was taking the step to remove any risk that a Leaving Cert student’s results would be impacted upon by the performances of previous classes.

She said there was no concern about students being unfairly disadvantaged by removing historical data, and that this was “the fairest approach and the right approach”.

The only school-based historical data used by the Department in the final calculated grades process were Junior Cert results for classes across schools. It used this to help predict the likely Leaving Cert performance of the class of 2020 in each school.

The briefing papers also show a more challenging Irish exam is being considered in the Leaving Cert for students who attend all-Irish schools or who are native speakers.

This is due to concerns that the existing exam paper is not challenging enough.

“There has been strong criticism that the present syllabus for Leaving Certificate Irish is unchallenging for those whose home language is Irish and those who attend Irish medium education…” the documents state.

While the treatment of student achievement in terms of entry requirements or CAO points is not a matter for curriculum developers, it says “it is likely this will emerge as an issue”.

The document also warns that a sharp decrease in primary school enrolments over the coming years will pose major issues for small schools in rural areas.

The decline in enrolment at primary level raises “sensitive and complex” issues such as “sustainability challenges for small schools, particularly in rural areas”, the documents states.

Ireland has the highest proportion of small schools in Europe and more than 500 of these school have just one or two teachers.