Hundreds of dogs and horses rescued in €59,000 operation which took nine days 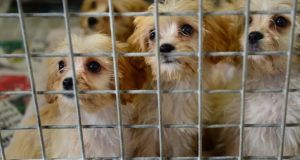 The conditions on the puppy farm in Co Carlow were described as squalid by an ISPCA chief inspector. Photograph: Dara Mac Donaill

A puppy farm where 340 dogs and 11 horses were kept in “absolute squalor” and dead dogs were used as food is one of the worst neglect cases ever seen, the Irish Society for the Prevention of Cruelty to Animals (ISPCA) has said.

James Kavanagh (48) was given three years in jail after he pleaded guilty to 30 counts of causing or allowing animal cruelty at his property at Raheenleigh, Myshall, Co Carlow, in April 2015, while his wife, Jennifer was given a 12-month suspended sentence

Writing in the ISPCA’s annual report, chief inspector Conor Dowling said: “Never in my 20 years have I seen such extreme suffering on such a scale. We discovered a number of dead animals scattered around the property, some of which were used to feed the dogs.

“It was harrowing. The living conditions these animals had to endure can only be described as squalid. Many of the animals did not have access to water or suitable food. The horror and sheer size of the rescue was extremely challenging,” he said.

It took nine days to evacuate all the animals to the ISPCA National Animal Centre in Longford and other rescue centres and cost €59,000. Most of the animals required some form of veterinary treatment and they had to be vaccinated, micro-chipped and treated for parasites.

The rescue happened in April 2014, but it took four years to bring a conviction. The case is included in the inspectorate report because it did not come to trial until October 2018.

The ISPCA was involved in 18 inspections in 2018 which came before the courts. ISPCA animal welfare inspectors carried out 3,494 investigations with 1,102 animals seized or surrendered and taken into ISPCA care.

The ISPCA said it could do so much more with increased funding. At present the society only covers 17 counties in the Republic. Dublin, which is covered by the DSPCA, Mayo, Galway, Clare, Kerry, Kilkenny and Wexford do not have inspectors.

Some 88 per cent of the society’s funding comes from the public. It says the Government should provide more funding for the organisation as it costs approximately €50,000 to keep an ISPCA inspector on the road.

The ISPCA responded to 17,338 calls for help last year. It carried out 3,494 investigations with 1,102 animals seized or surrendered and taken into ISPCA care.

Mr Dowling said the society’s resources are “dangerously stretched” and that it frequently has to use private boarding kennels when the three rescue centres are full to capacity.

“This is not sustainable. The cases highlighted in the report represent some of the horrific cases of animal cruelty and distressing situations ISPCA inspectors face during the course of their work on a regular basis,” he said.

“We can do more if we have the resources and we are appealing to the Irish Government and the animal-loving public to help us continue this vital work caring for Ireland’s most cruelly treated, neglected and abused animals.”

* ISPCA inspectors rescued three dogs, two of them Chihuahuas and the other a Yorkshire terrier, from a property in Youghal, Co Cork. The animals were at “death’s door” and two were extremely emaciated. There was no clean drinking water and their kennels were filthy. Senior inspector Lisa O’Donovan described it as “one of the most horrendous cases of abandonment I’ve come across”.

* A rhea bird (a flightless) bird from South America, a rare breed of pig, a pony and various dogs were found to be living in intolerable conditions in Co Westmeath. Their owner had run an animal sanctuary, but was overwhelmed by the work involved and ended up neglecting the animals.

* ISPCA inspectors uncovered six emaciated horses outside Portlaoise. The horses were so thin that their ribs were protruding. ISPCA inspector Mary Claire Casement also discovered the decomposed carcasses of a number of horses. She recalled: “I walked further along the field to discover another dead horse that appeared to have died some time ago and I also observed the bark from the trees in the area had been missing, consistent with a large animal chewing at it. It was such a shocking discovery.”

* A royal python was found by startled walker near Leitrim’s Kinlough Park where the snake was sunning himself on the side of a trail. The snake, later called Penelope, was finally caught and brought to a reptile centre in Letterkenny for rehabilitation.

* Inspectors rescued 44 cats from a house in Co Meath where previously there had been just three cats. The original occupants were neither neutered nor spayed and their numbers grew at an unsustainable rate.